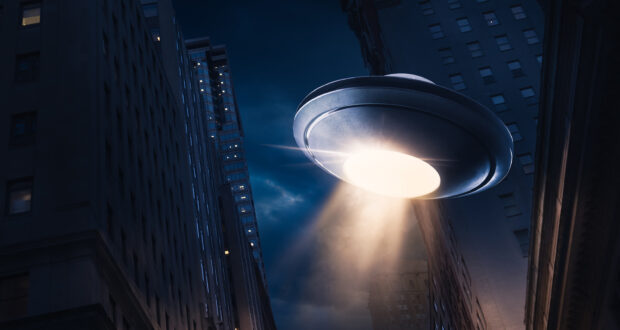 The buzz down on Conspiracy Street is that the Brits are about to drop a big fat UFO disclosure bombshell on the world. Government officials in the United Kingdom have announced they will publish online sightings of unidentified flying objects received by a Royal Air Force unit tasked with investigating the threat potential of this strange phenomenon.

British UFO reports spanning six decades will be accessible online “sometime within the first quarter of 2020,” according to the Royal Air Force (RAF). For the first time, anyone with an internet connection will be able to inspect the island country’s documentation on decades of its paranormal investigations.

The RAF’s UFO unit was established around 1950 after the 1947 global wave of UFO sightings to deal with the flood of new reports. The UK’s Ministry of Defense (MoD) formed its Flying Saucer Working Party to look into the mystifying matter.

A 1952 memo from England’s Prime Minister Winston Churchill to his air minister in 1952 asked, “What does all this stuff about flying saucers amount to? What can it mean? What is the truth?”

From the early 1950s, the British media began treating the numerous, new, and extraordinary UFO reports with a more sober tone. Leading newspapers published portions of books such as Is Another World Watching? The Riddle of the Flying Saucers by Gerald Heard, a British-born American science writer, and The Flying Saucers are Real by American Marine Corps naval aviator Major Donald E. Keyhoe (1950).

The military program was shuttered in 2009 after investigators concluded that none of the reports showed evidence of any national threat and “that no further investigation of reported mysterious aerial phenomena be undertaken.”

Much like the United State’s Project Bluebook UFO inquiry, the British ufologists explained away unknown aerial objects as fakes, delusions or ordinary objects that were misidentified.

The RAF reports on unknown objects were filed in England’s National Archives. Many were marked classified until a future authorized release date.

National Archive reports show that the MoD continued official UFO investigations in other departments after the Flying Saucer Working Party was disbanded.

The UFO disclosure decision was made after the British news agency PA Media filed a Freedom of Information Act (FOIA) request for the UFO files.

However, a  spokesman for the RAF revealed that the most recent UFO information will be uploaded for public review after “it had been assessed that it would be better to publish these records rather than continue sending documents to the National Archives, and so they are looking to put them on to a dedicated gov.uk web page.”

The RAF spokesman added that the British Ministry of Defense “has no opinion on the existence or otherwise of extraterrestrial life and does not investigate UFO reports.”

On August 5, 2010, the British government released files on hundreds of UFO sightings that proved the subject of UFOs was a serious one. Documents show that top UK intelligence officials held meetings to evaluate the matter.

One MP asked the MoD in a letter, “Why were RAF fighter planes not scrambled to investigate this?” referring to an unexplained light filmed in 1996 above the small port town of Boston in Lincolnshire on the east coast of England, about 100 miles north of London. The light matched a strange blip on an air traffic controller’s radar screen.

The investigative report released in 2010 concluded that the light captured on video and confirmed by military radar was the planet Venus and the radar clip was an echo from a tall church spire.

Other documents proved that, in 1957, the MoD discussed UFOs at a joint intelligence committee meeting.

After the Cold War ended, the official government position regarding UFOs changed. By the 1990s, as public interested waxed, interest by the British military waned. RAF aircraft were no longer scrambled in response to a UFO sighting.

Even so, a 39-page PDF file released previously by the British National Archive listed UFO sightings from 2009 that included this intriguing experience at an unspecified location:

“Over my house. It was massive. Unbelievable. The noise was incredible. I thought we were under nuclear attack.”

Another observer from Grimsby, Lincolnshire filed this report:

“Light in the sky. Other lights falling or dripping from it to the ground. At first thought it was fireworks. Made no noise and was the size of a helicopter.”

One thing is certain: ufologists around the world will have a field day after the British X-files are released online. It’s also clear that UFOs are not a question of belief when a major world government has established its certainty by admitting to gathering data on them for more than 60 years.

Previous: What Are Some Alternatives to Traditional Therapy?
Next: Which Celebrities, Athletes and Public Figures have been Diagnosed with Coronavirus?