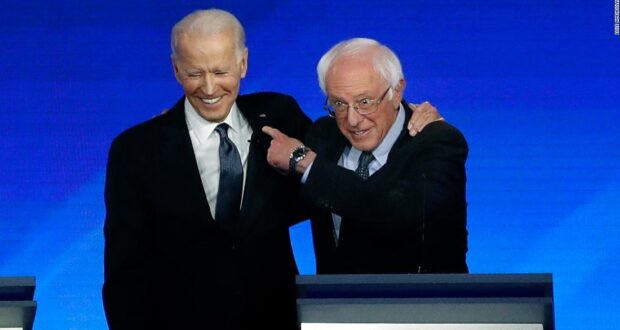 Joe, Bernie, and the Hard Left

What’s the price of a good socialist these days? A wilted rose, dog-eared copy of Das Kapital, and a glass of Château Margaux 1848?

Or is it just a dais and eleven and a half minutes of speaking time at a major party’s televised debate?

“Today, I am asking all Americans — I’m asking every Democrat; I’m asking every independent; I’m asking a lot of Republicans — to come together in this campaign to support your candidacy,” Bernie announced on a livestream with his ci-devant rival for the nomination. Bernie sounded a bipartisan, conciliatory tone, but, in actuality, he was speaking to his own supporters, whose contumacious Guevaraism may cause them to sit out in November.

That Bernie endorsed Biden this early may have caught his supporters unawares. In 2016, he waited until July to give Hillary Clinton his approbatory bestowal. Not even Elizabeth Warren, whose campaign was a disappointing patch on her senatorial comrade, had yet given the erstwhile veep her blessing. (Warren fell in line not twenty-four hours later, putting out a slick and smarmy composite video to accompany her endorsement. She persisted is out; she propitiated a man for a cabinet position is in.)

Now comes the four-hundred-million-dollar question: will Bernie’s most fervent disciples accept defeat once again, and accede to the very establishment they disavowed? “I’ve got news for the Republican establishment. I’ve got news for the Democratic establishment. They can’t stop us,” Sanders tweeted in the fevered run-up to his decisive victory in the Nevada caucus. Back then, Bernie’s victory seemed ineluctable. His vitiation of the Democratic Party’s supremacy was a forgone conclusion.

Now his selfsame followers who chanted “DNC delenda est” have to reckon with two dashed hopes: their candidate’s loss and bending the knee to the victor.

Spoiler: Joe Biden, Tom Perez, Nancy Pelosi, Michael Bloomberg, and George Soros shouldn’t be hag-ridden by the nightmarish scenarios of a Bernie-Bro boycott on Election Day. Except for a statistically insignificant clutch of diehards, the socialist flank of the party will swallow their pride and pull the lever for ol’ Joe.

This may not be apparent right now, with Bernie’s cadre of online apparats refusing to accept that the dialectical materialist awakening won’t be happening this year. The official Democratic Socialists of America Twitter account put down its marker: “We are not endorsing @JoeBiden.” There’s a video circulating of a gamine millennial Sanderista begging Democrats, “please don’t make me vote for Joe Biden,” in a syncopated trill, shaking an aspirin bottle.

Sanders surrogate and harpy congresswoman Alexandria Ocasio-Cortez is withholding her embrace of Biden until she gets policy concessions, i.e. single-payer health care. Like a true socialist, she seems unaware of the commercial art of negotiation: her team lacks leverage. Soon, Sandy O’s party will fully endorse Biden. The Queens commie, like all celebrated It Girls, will conform to expectations.

Anti-Biden pleas and declarations from left field are safe to make now. They cost nothing and have no electoral consequences. They’re a way of blowing off steam over failing to turn the DNC into the American Gosplan. Come autumn, these heady proclamations will be forgotten, and the hard socialist left will toe the line as if obeying the warden at a katorga camp.

How can we be sure? Consider the leftist mindset: everything is ideological machtpolitik, not politics in the traditional sense, the push and pull of moving society ever closer to the common good. Political power isn’t the only thing that grows from the barrel of a gun; so does the über-left’s sense of meaning. Progress can only be made holding the levers of control. Once the grip is secure, subversion becomes easier, especially within the obnubilated bowels of the federal bureaucracy. Just ask Whittaker Chambers, or Carter Page.

Power-mongering is the modus operandi of the serious progressive. Retaking the White House is the fastest way to recruiting more like-minded true believers in positions of authority. Like Faust courting Mephistopheles, Bernie backers are willing to trade their external principles for an internal goal of long-term graduation to a worker’s paradise. The right derides this as incrementalism; the left sees it as necessary politics.

There is no tuning in and dropping out for Bernie’s apostles of Bolshevism. Everything is political participation to democratic socialists. They will apply a moralistic squint towards all of Biden’s failures: his un-progressive record, his lack of conviction, his handsy, overly friendly demeanor towards the opposite sex.

President Trump shouldn’t count on a schism within the Democratic Party to occasion another victory. The left will rally behind its most cohesive element: hating the current occupant of the White House. Socialist, moderate, syndicalist, or neoliberal — no matter the label, the defeat of Donald Trump is a victory for the left all the same.

Previous: Instacart, other grocery delivery service delays, cancelations
Next: No Wonder the Kids are Historically Illiterate