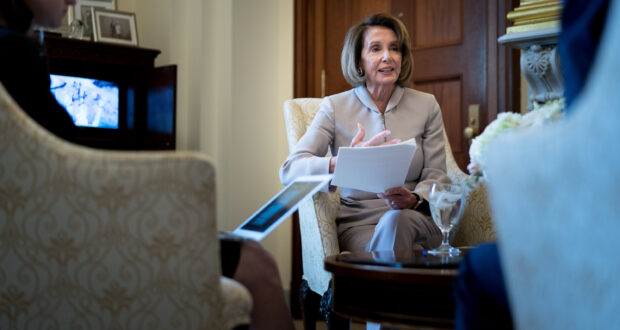 As President Donald Trump beams into American homes with his daily coronavirus briefings, Speaker Nancy Pelosi has decided the best way to counter him is to be everywhere — even if that means doing so from her San Francisco kitchen.

Almost daily, Pelosi pops up on one network or another — even cycling through the late-night talk show junket — dropping in for interviews from a computer propped up on a dining room table that sits just off her West Coast kitchen.

“He has the bully pulpit and that’s a good thing for a president to have. It’s a bad thing for the health of the country if the president is not speaking truth,” Pelosi said in an interview. “Our purpose is really to say how do we follow the science, the evidence, the data … that will take us down from this.”

For Pelosi, leading the counterprogramming is the most effective antidote to Trump’s nearly daily briefings. Since first joining the news conferences a month ago, Trump has been repeatedly criticized for peppering his appearances with falsehoods during the briefings, which often stretch beyond two hours.

And even as former Vice President Joe Biden becomes the presumptive Democratic nominee, it’s Pelosi who remains the most prominent face of opposition against Trump.

For Pelosi, confined to her residence like much of America, it’s the longest stretch she’s slept in her own bed in years. During normal times, Pelosi is juggling her legislative load with a fast-paced fundraising schedule that has her crisscrossing the country more than 200 days a year, hauling in hundreds of millions of dollars for the Democratic Party.

But these aren’t normal times — and as the coronavirus continues to claim more lives each day, Pelosi, like all Americans, has been forced to adjust. That means uncharacteristically staying in one place — right now it’s San Francisco, but Pelosi has also traveled back to Washington to help shape the coronavirus relief bills.

And as a top negotiator in those trillion-dollar talks, Pelosi has worked to hold the line against Trump and Senate Majority Leader Mitch McConnell, demanding to go bigger even if it meant delaying a deal for days as unemployment numbers and political pressure increased.