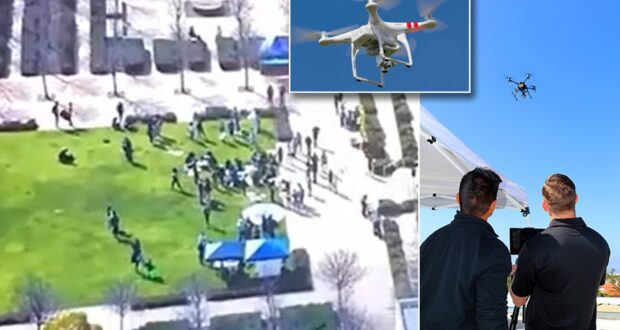 It’s as if the Deep State and the New World Order think We the People are utter morons. Lock us inside so we can’t see what’s going on in the outside world. Too bad for them it isn’t working. Keen observers are on to their evil plot to take over the world.

First, the World Health Organization (WHO) ordered hospitals to inflate the number of cases and deaths attributable to COVID-19, warning of impending doom for hundreds of thousands of Americans at risk from coming down with the disease that, for many, is completely recoverable.

This move was designed to create a heightened sense of fear that has proved completely groundless. Americans readily agreed to stop working and “shelter in place” rather than enjoying the Spring weather in public parks and the great outdoors. We were told this had to be done to stop the contagion.

Since the federal campaign called “15 days to slow the spread,” which began in mid-March 2020, estimated U.S. cases and deaths have gone down, not up. Of course, the globalists claim that their draconian quarantine measures are responsible and there might be some truth to that. We can never know for sure.

Most Americans have obeyed the variety of swift, sudden, summary orders from their federal, state, and local governments to shelter in place, maintain social distancing of six feet between people, and stop working at businesses the NWO finds “non-essential” – now including hardware and garden seeds in some parts of the country.

Now, we learn that at least two U.S. police departments are taking advantage of the extraordinary emergency powers in play now by recently deploying advanced robotic technologies to spy on citizens from the air and report anyone suspected of violating a stay-at-home order. This is a patent encroachment on our civil liberties and residents paid for it.

Mayor Chris Bollwage of Elizabeth, New Jersey, beat the NWO drum about how lethal COVID-19 is, despite footage showing deserted hospitals and empty parking lots. Here is how the Democratic leader justified trampling on his constituents’ freedoms:

“The most important thing you can do to fight this virus is stay at home. Some may notice drones monitoring your neighborhoods. These drones are going to alert people to move away from each other if they are congregating. This is not a joke. It is extremely serious.”

The drones are equipped with a recording of the mayor’s voice telling anyone deemed in the wrong place at the wrong time to stop gathering, disperse, and go home. The Elizabeth police department’s Facebook page warned:

“Summonses HAVE AND WILL CONTINUE to be issued to those found in violation. Fines are up to $1000. You have been advised.”

Drones aloft in Daytona Beach, Florida, will serve to nag citizens to obey or face the legal consequences. The sugar-coated message “asks” miscreants to “please adhere to social distancing guidelines.”

The police must be ecstatic over the new remote-controlled tool that lets them sit around a climate-controlled room munching doughnuts while they play with an expense tech toy, all funded by taxpayer money.

With national highways all but empty thanks to the enforced coast-to-coast lockdown, what better time to test fleets of driverless trucks? An article that appeared at the same time governments first issued mandatory COVID-19 response measures exulted that autonomous, driverless 18-wheeler trucks are being tested.

Freight transportation executives are gloating about improved profits from automation. Who cares if truck drivers, the #1 job in many U.S. states, lose their jobs? Their work is destined to become non-essential, performed by a machine that requires no sleep, only periodic maintenance.

Chuck Price is the Chief Product Officer at TuSimple, an autonomous trucking firm that operates in the U.S. and China. TuSimple is testing driverless trucks in Arizona and is on track to perform its first driverless demonstration runs on public highways in 2021.

The American Trucking Association estimated that more than 8.7 million people are employed in that critical industry, with about 3.5 million of them working as professional truck drivers in the U.S. Autonomous trucks and taxis promise to eliminate jobs in large numbers under the banner of public safety.

Another industry poised to profit from American’s imposed isolation is telecommunications. With mass gatherings banned, citizens can’t assemble to protest the 5G rollout that many oppose for health and safety reasons. The high-frequency wifi frequencies have been linked to a slew of unpleasant symptoms.

But what do the major telcos care about a few headaches and seizures among their customers, the majority of which have no idea that the powerful radiation has not been tested by its inventors? These corporate officers have gone on record to say they have no interest in spending money to ensure anyone’s benefit except that of their stakeholders.

Verizon is justifying its 5G rollout with its estimated 75-percent increase in bandwidth demand at the beginning of the flu lockdown, between March 8 to 15. Having created the problem – more people using internet bandwidth at home since they can’t go to their offices – the NWO operatives are happy to provide the solution: 5G.

It’s time for Americans to wake up and smell the bacon – while there are still pork producers. Contact your elected officials to share how you feel about staying at home while select industries, owned and protected by the NWO globalists, flourish. Weigh in on illegal drone aerial surveillance while you’re at it.

It is, after all, an election year.

Previous: Survey: 35% say working from home has harmed mental health
Next: Serena Williams Has a Simple Workout Routine You Can Do At Home