Home » Politics » US President Trump Smacks Down WHO For Bungling 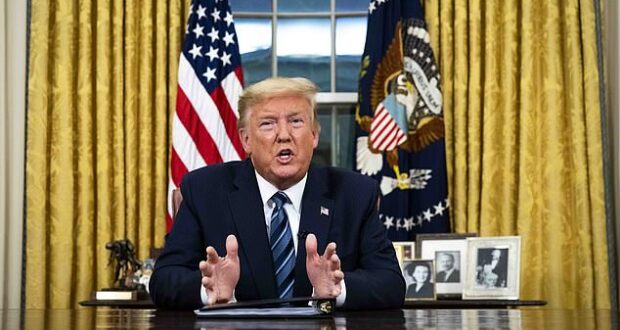 US President Trump Smacks Down WHO For Bungling

“When they call every shot wrong, that’s no good.”
– U.S. President Donald Trump, speaking about the World Health Organization

Recently U.S. President Donald Trump spoke from the White House in Washington, DC, about how United Nations’ international health oversight organization has failed repeatedly to give good advice to world governments on how to handle the Wuhan coronavirus COVID-19.

This speech is pivotal because the Commander-in-Chief of the United States of America is taking a stand against the global elite who appear to be orchestrating a master scheme to impoverish the West, migrate third-world Easterners to the West to occupy it, drastically reduce the planetary population, force vaccinations that contain a lethal cocktail of unnecessary additives (such as antifreeze and mercury), kill small businesses and brick-and-mortar stores, create a cashless society, and set up a Global Reserve Bank to control everyone’s credits and debits.

When that happens, anyone of us could be denied access to our online bank accounts with the click of a mouse. Our identities could be wiped. We could be “disappeared” virtually – and physically if medical martial law is indeed part of this truly evil plot.

The President hasn’t yet called the World Health Organization (WHO) evil. Here’s what Trump did say two days ago, reading from a prepared text:

“WHO – that’s the World Health Organization – receives vast amounts of money from the United States and we pay for…the biggest portion of their money.”

This is true. According to social justice and global public interest advocacy not-for-profit organization Knowledge Ecology International, WHO’s top two donors in 2018 were:

On March 11, Trump announced that travel by foreigners from Europe to the U.S. would be largely suspended for 30 days to slow the spread of the bronchial infection from abroad. The rule didn’t apply to American citizens or permanent legal residents and their families.

In his recent speech, Trump noted that the UN’s medical experts trivialized his precautionary measures to protect the nation and, instead, backed Communist Chinese sources who said COVID-19 was no big deal and under control:

“They [WHO] actually criticized and disagreed with my travel ban at the time I did it. And they were wrong. They have been wrong about a lot of things.”

The U.S. leader said WHO ignored early information and “seemed to be very China-centric…and we have to look into that. So we’re going to look into it.”

President Trump repeated that WHO had “called it wrong” when it came to responding effectively to the growing viral outbreak:

The U.S. President added that his administration planned to put “a very powerful hold” on WHO funding pending further investigation into the facts of the matter.

Saying that WHO projects and advice are “a great thing” when they work – but that hasn’t happened with the globalists’ handling of the pandemic they announced and perhaps created:

“When they call every shot wrong, that’s no good.”

Trump has been skeptical of the recent mandatory closing of nonessential businesses and stay-at-home orders.

“WE CANNOT LET THE CURE BE WORSE THAN THE PROBLEM ITSELF. AT THE END OF THE 15 DAY PERIOD, WE WILL MAKE A DECISION AS TO WHICH WAY WE WANT TO GO.”

So much for the “15 days to slow the cure” campaign. Thanks at least in part to WHO mismanagement, Americans are now being told to expect to remain under partial quarantine for months.

In early April, one WHO official stated candidly that most of the transmission currently happening in many countries has been corralled in households, at the family level. Therefore, those people must be hunted down and seized, for the good of the majority:

“In some senses, transmission has been taken off the streets and pushed back into family units. Now, we need to go and look in families to find those people who may be sick, remove them, and isolate them in a safe and dignified manner.” [emphasis added]

Vaccine king Bill Gates wants mandatory vaccination certificates or you can’t drive your car or board a plane or train. There are no more public assemblies or gatherings. Prom and graduation were canceled.

This is the globalists’ wet dream come true. Let all of us who hold dear our freedoms and civil liberties pray that Trump’s team is strong enough to defeat the Dark Cabal or we’ll soon be taking orders from Mr. and Mrs. Gates and their minions.