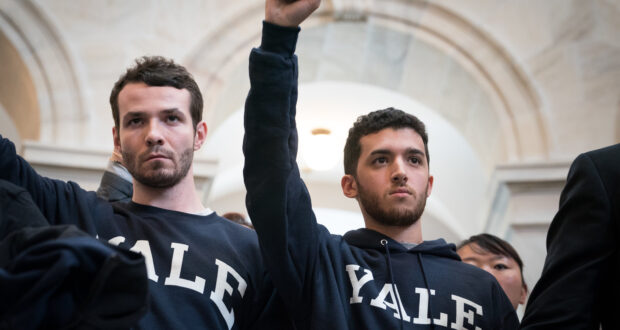 Yale Students are using Coronavirus as an Excuse

Yalies will protest anything — now they want all students to get a “Universal Pass” rather than grades in the wake of COVID-19.

Leave it to Yale students to make a crisis about themselves. While worldwide death tolls from the coronavirus grow exponentially every day, these privileged Ivy Leaguers are putting their (supposedly) considerable brainpower into getting out of homework.

That’s right. About 24 hours after the semester went online due to coronavirus fears, Yale students demanded a “Universal Pass” policy for the semester. No grades, deadlines or benchmarks. Everyone automatically passes their classes.

As representatives of one of America’s most important institutions, I assumed Yale students would rise to the occasion and lead their communities during a crisis. Instead, they see an international health disaster as an opportunity to nullify the one meritocratic standard the college has left: grades.

Their call for a Universal Pass betrays a mindset spreading among too many Yale students: “I should be shielded from every crisis.”

Any trouble in the world is apparently too great an emotional load for my peers to bear. Parkland shooting? Time to walk out of class. Climate change? Let’s have a school-wide “strike.” Coronavirus? Just cancel grades. That’s the only solution.

Students’ self-centered pity was recently exemplified in a recent New York Times opinion piece titled “I Just Don’t Think We Have the Luxury to Have Dreams Anymore.” In it, a Yale junior claims that the prospect of a recession is just too much for Generation Z, lamenting that all hope is lost because her internship might get canceled and a furnished sublet in NYC is so difficult to find — truly a tragedy for the century.

The university, led by mollycoddler-in-chief Peter Salovey, is feeding this defeatist mentality, allowing Yale students to become accustomed to the university dropping its academic standards whenever they’re mildly inconvenienced. After President Trump got elected, students demanded midterms be canceled because of the adverse effects on their mental health. Professors capitulated.

This semester the Yale administration offered a reasonable accommodation: students could opt-in to a “Pass/Fail” grading system. But even that wasn’t enough. Students, including the Yale College Council Senate, are still mandating that every student be forcibly opted-in to “Universal Pass.” Who cares if some students want to receive letter grades? Everyone gets a “P.” (Meanwhile, Harvard, like many other peer institutions, has adopted an Emergency Satisfactory/Emergency Unsatisfactory (SEM/UEM) grading policy for the spring semester.)

Universal Pass, unsurprisingly, has been framed as a fight for low-income students. Infantilizing the disadvantaged is a typical activist behavior at Yale. Whether protestors are “striking” because of climate change’s effect on indigenous communities or pushing for the nullification of grades because a slipping economy will harm low-income students, the demands of elite Yalies always conveniently line up with those of the underprivileged.

But, in reality, this latest crusade is just an excuse to do less work and abolish academic standards altogether. In my four years at Yale, I was consistently shocked by the creative excuses used by my peers to skip classes and exams. It’s quite brilliant, really — get out of class and virtue signal by arguing it’s a way to “advocate” for low-income students. I wish I had that type of ingenuity in second grade. You can only fake a stomachache so many times.

Ironically (or perhaps intentionally) Universal Pass hurts disadvantaged students by ending their ability to distinguish themselves based on merit. It also, invariably, helps wealthier students with friendly connections at prestigious employers or top-tier grad schools, who are more apt to overlook mere passing grades during trying circumstances.

Meanwhile, don’t believe for a second that these Universal Pass demands are temporary. The real motives for easing standards have nothing to do with coronavirus at all. What students really want is to jettison grading permanently so they don’t have to work so hard. It’s nothing but laziness and virtue signaling disguised as activism.