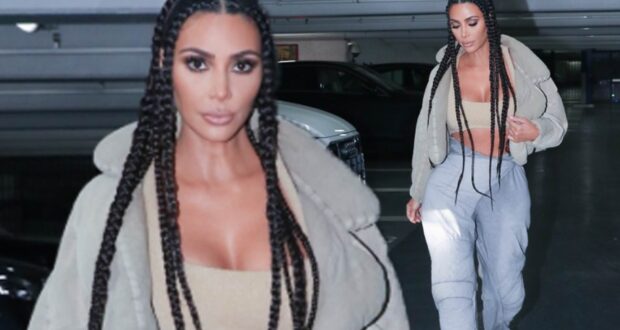 Kim Kardashian is being accused of being ‘casual racism’ and ‘laziness’ after posting promotional images of her new SKIMS face masks.

Kim, 39, recently debuted the line of protective face masks, which come in various shades of ‘nudes,’ much like her shapewear, underwear, and loungewear.

But while the masks sold out in just 30 minutes when they went on sale this weekend, not everyone was impressed with the launch: Dozens of commenters have taken issue with a black mask being advertised as a ‘nude’ option for a dark-skinned woman.

The masks went on sale in five colors on Saturday, costing $8 each with a pack of four selling for $25.

In addition to selling them online, the company is donating 10,000 to partners including Baby2Baby, Good+ Foundation, LA Food Bank, and National Domestic Workers Alliance.

The shades of the masks include ivory, beige, tan, brown, and black, and are modeled by women with supposedly similar skin tones.

‘Shop @SKIMS Face Masks in 5 shades of Nudes at http://SKIMS.COM,’ Kim tweeted as the sale launched.

But commenters quickly noted that some of the masks were hardly ‘nude’ if nude is supposed to match skin tone — and noted that the darkest-skinned model’s mask was black, rather than dark brown like her skin.

Angry: Commenters expressed anger and disappointment that the darkest-skinned model’s mask was black instead of dark brown

‘The nude shade for the Black model is inaccurate, offensive, and culturally out of touch,’ wrote one commenter.

‘Black women deserve more than your mediocrity & laziness!’ tweeted another, while a third said: ‘The color black isn’t nude for black people but go off.’

‘You literally made the black models mask TOTALLY BLACK,’ wrote yet another. ‘You do realize black people aren’t the color black like white people aren’t paper white? The other skin tones are fine but why couldn’t you make a dark brown color?’

And another chided Kim for not knowing better, considering the diverse makeup of her family.

She wrote: ‘You’d think this family would know shades of black skin tones considering their kids are black too and you’d think by now they would know that this is not a black nude tone but go off kimberly with your profiteering on casual racism.’

Gone! Despite the backlash, the first batch of masks sold out in just a half hour

Some supporters have argued out that the lightest-skinned model appears to be wearing a white mask — but the website reveals that it’s actually a shade of ivory.

Kim hasn’t responded to the backlash, and has only tweeted a promise that the masks will be restocked soon.

‘Unfortunately our @skims face masks have sold out today but we’re working with our local partner in LA to produce more as quickly as possible,’ she wrote.

‘The next batch will be available next week – please sign up to receive more details coming soon, and thank you for your support.’

January 2018: Kim sparked fury online after showing off a new braided hairstyle, while referring to her corn rows as ‘Bo Derek’ braids – in reference to the actress’ appearance in the 1979 movie, 10. The comment was immediately blasted by her followers, who branded her ‘disrespectful’ and accused of her cultural appropriation. ‘You should be ashamed of yourself for calling your Fulani braids, bo derick braids….you are truly a culture vulture,’ one person said.

April 2018: The Keeping Up With the Kardashians star was blasted when she stepped out at one of Kanye West’s church service wearing a traditional Indian maang tikka head piece. She shared her outfit on social media with the caption ‘Sunday Service Vibe’, but some Instagram users were unimpressed with her apparent mishmash of cultural items, with one explaining that the maang tikka is usually worn by brides – and wearing white in India is traditionally reserved for funerals.

June 2018: Mother-of-four Kim once again faced a brutal backlash when she wore tight corn row-style braids to the MTV Movie and TV Awards.

June 2019: The reality star incited outrage when she launched her shapewear line, which was originally called Kimono. Kim was accused of cultural insensitivity, and faced further fury when she initially refused to change the brand name. However, after the backlash – and a letter from Japanese mayor Daisaku Kadokawa – she revealed that she was changing the name to SKIMS.

March 2020: Kim’s hair was the subject of much controversy once again when she attended her husband Kanye’s Paris Fashion Week Show, modeling tight corn row-style braids. The TV star, who is half Armenian, faced a backlash when she shared a snap of her look on Twitter, with users accusing of appropriating black culture. ‘You are not black this s**t is so racist,’ one person wrote. ‘PLEASE listen to the Black people telling you that this is cultural appropriation & not okay. Black people face legal discrimination simply because of their hair and you get to just wear it for fun. do recognize how privileged this is?’

Previous: The Shocking Coronavirus Symptoms That Could Last for Years
Next: Should the U.S. Change to a 4-Day Workweek?