Home » Love & Life » Why Queen Elizabeth Could Be Considering Stepping Down 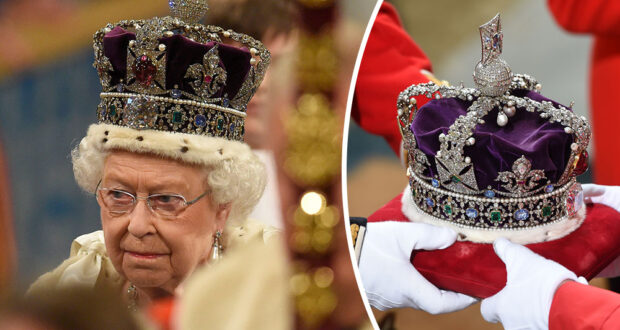 Why Queen Elizabeth Could Be Considering Stepping Down

Last year was one of the most tumultuous yet for the royal family. Prince William and Prince Harry’s private grievances with each other erupted in a public feud and Prince Andrew’s involvement in a sex scandal resulted in his banishment from Buckingham Palace. But 2020 is proving to be even more difficult for the House of Windsor. First, of course, was Harry and Meghan Markle’s dramatic exit from royal life. And now, due to the COVID-19 pandemic, there may be a seismic shift that could change the future of the British monarchy in a matter of months.

Shortly after news broke that a Palace staffer had tested positive for COVID-19 at the end of March, Queen Elizabeth decamped to Windsor Castle to self-isolate with Prince Philip. Then, Prince Charles announced that he had contracted the virus. While he has recovered, he remains in self-isolation at Birkhall, his home in Scotland on the grounds of Balmoral, with his wife, Camilla, Duchess of Cornwall. But the latest news, according to The Times, is that the Queen is withdrawing from public life and “will remain at Windsor Castle indefinitely,” which has royal watchers speculating about whether Her Majesty is finally ready to give up the throne.

Would 71-year-old Prince Charles finally become King or will she name Charles as prince regent, which would allow him to officially carry out the duties of sovereign until Her Majesty’s return? A royal source told The Times there will be further discussions in October, noting, “The Queen won’t do anything which goes against the advice of people in her age category and she’s going to take all the appropriate advice.”

One Palace insider told me that there is a great deal of concern over whether the 94-year-old monarch will ever again be able to assume many of her responsibilities. “Given Her Majesty’s age and the ongoing threat she faces due to the nature of virus outbreak, it’s hard to imagine her coming back any time this year—and possibly beyond that. It would be the longest absence during her entire 68-year reign,” said my source. “Her decision to self-isolate in Windsor was a prudent one and, as time goes on, she may well decide the time has come to name the Prince of Wales as prince regent.”

While the Queen has not been seen in public since Commonwealth Day Services on Mar. 30, she has played a pivotal role in rallying the U.K. in the face of the pandemic, reminding them on two noteworthy occasions to keep calm and carry on. In early April, she gave a televised address—only the fifth one of her entire reign—where she sounded notes of hope and encouragement in the face of the crisis. Then, last week, she made a touching speech where she shared her own memories of Victory in Europe Day, urging the British people to remain strong and not give up in the fight against the coronavirus.

The Queen has, however, canceled many of her favorite and most high profile royal engagements for the remainder of this year, including Trooping the Colour and the Braemar Gathering in Scotland, as well as the annual summer garden parties held at Buckingham Palace. “This is such a departure for the Queen, who has always been able to press on regardless of circumstances,” said my source. “But this is beyond her control.”

“Never give up, never despair – that was the message of VE Day”

An address by Her Majesty The Queen on the 75th anniversary of VE Day #VEDay75 pic.twitter.com/prgBXCdRHF

Another possibility for the future of the monarchy, according to my source, is that Charles will act as a “shadow King” in his mother’s absence—unofficially carrying out the Queen’s responsibilities behind the scenes as he was thought to have done after Prince Andrews’ disastrous BBC interview and during the Megxit negotiations.

“There is no question that Charles gained more power in the last year within the family,” an insider told me. “It is the natural progression of things, but the virus may put whatever plans that have been made on an accelerated path. It’s impossible to know whether that means Charles becoming regent, or ascending the throne, or just maintaining things as they are. The circumstances are unprecedented and too fluid to predict the future right now. An enormous change could happen at any time.”

Earlier this week, The Express asked readers in a poll: “Should Charles become prince regent if [the] Queen can’t return to duty due to COVID-19?” In response, 1,210 out of 2,065 said “no,” with several readers noting that the Prince of Wales is still among those most vulnerable to the illness.

One respondent suggested the monarchy “skip a generation to Will and Kate if we need a visible monarchy attending royal duties.” Prince William and Kate Middleton have taken on higher profile roles since the pandemic struck, upping their presence on social media and becoming quite skilled at virtual visits.

In a separate Express poll, 76 percent of the respondents voted “yes” to the question “Should William become regent?” One royal watcher wrote: “He certainly appears to have his head more screwed on than most of the others and Kate is down to Earth too and compassionate.”

“There is no question this pandemic has changed everyone’s life in both big and small ways. The royal family is no different,” said my source. “The difference is for them, if there is to be some sort of transition this year, it will be at a time when there has already been far too much unsettling change. The Queen is the only monarch most British people have ever known. Whatever happens in the future is going to have a huge impact.”

Previous: Why You Should Never Wear Hair Ties on Your Wrist
Next: The Shocking Coronavirus Symptoms That Could Last for Years