What Happens to Confederate Statues after they’re Removed? 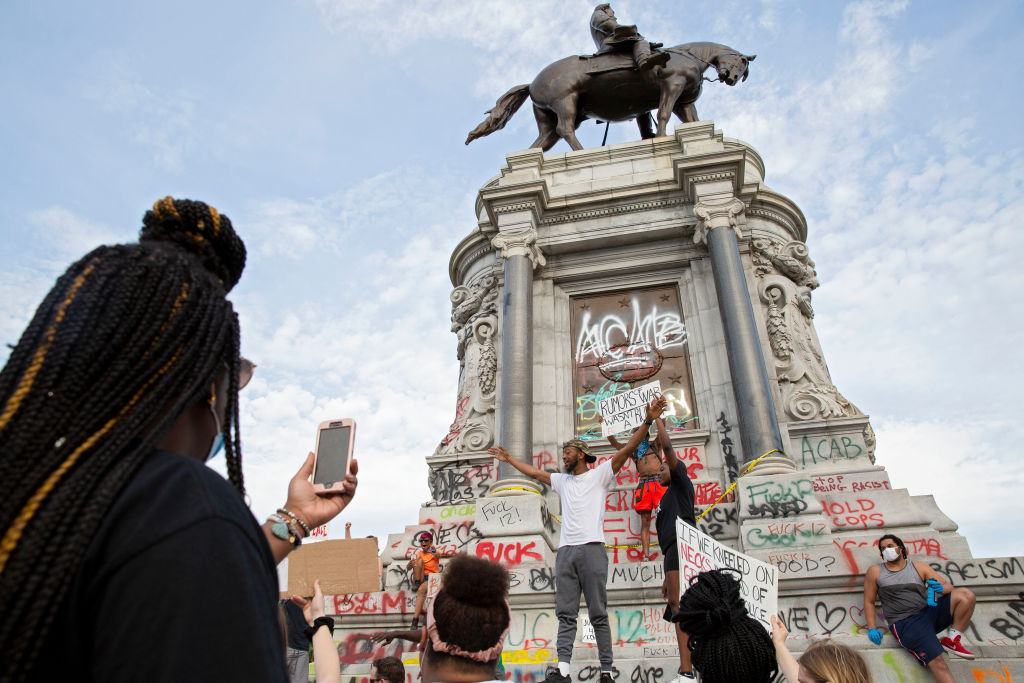 The nationwide protests against racial injustice and police brutality have quite literally seen potent symbols of the United States’ checkered history toppled from their pedestals.

Statues, monuments, and other images honoring Confederate soldiers, slave owners, and other controversial historical figures have been torn down from Virginia to California – either officially or by the protesters themselves – as the country’s public reckoning over its treatment of African-American and other minorities continues.

But once the memorials to historical figures, ranging from Robert E. Lee to Christopher Columbus, are ripped from the plinths, public officials then need to figure out what to do with the literal larger-than-life figures.

If recent history is any judge, many of these statues and monuments are bound for a dusty corner in some darkened warehouse.

Following the violence and chaos that ensued after a white supremacist protest in Charlottesville, Va., in 2017, there was a similar push to remove symbols of the Confederacy from public places across the nation. Statues of Robert E. Lee, “Stonewall” Jackson, and other Confederates were fast-tracked for removal and shipped off to hidden places until local lawmakers could figure out what to do with them.

“The South seceding from the Union made the process of ending slavery happen much more quickly than if they hadn’t left,” John Fabian Witt, a professor at Yale Law School, told Fox News at the time. “It seems now like neo-Nazis and white supremacists are doing the same thing. Their protests are only making the monuments come down quicker.”

In Baltimore, then-Mayor Catherine Pugh had three memorials to the Confederacy and a statue of Roger B. Taney, the Supreme Court justice who wrote the Dred Scott decision that upheld slavery, removed following the Charlottesville violence. While she generally kept quiet about the location of the removed monuments, before leaving office she did hint that they are in storage in “a pretty safe place” and that the city was in talks with museums and Confederate cemeteries about taking possession of the statues.

While some cities have chosen to stay quiet about what they plan to do with the removed monuments – for fear that they will be vandalized or stolen – others have been less coy.

In the college town of Gainesville, Fla., the United Daughters of the Confederacy were given a statue of a Confederate soldier known as “Ole Joe” after a local history museum declined to accept it and a veterans group objected to its transfer to a nearby park. The United Daughters of the Confederacy, a heritage group that has been accused of supporting white supremacist ideas, erected the monument in 1904 in front of the Alachua County courthouse.

Aside from private groups, some smaller municipalities and even private businesses have been open to accepting Confederate monuments.

The small Kentucky city of Brandenburg in 2017 accepted a 70-foot-tall concrete plinth with an oversized statue of a rebel soldier that the University of Louisville had removed after years of criticism from faculty and students. Brandenburg Mayor Ronnie Joyner, who placed the monument in a riverside park that hosts a biennial Civil War reenactment, said that he didn’t see the monument as “a black vs. white issue” or as “a slavery issue.”

Following the 2015 massacre of nine people inside a Charleston, S.C., by white supremacist Dylann Roof, Maryland’s Montgomery County executive decided to remove a Confederate monument in the Washington D.C. suburb of Rockville. The 13-ton statue of the Confederate soldier, which had stood in the town since 1913, was transferred to White’s Ferry, a privately run Potomac River ferry named after a Confederate general.

Another place where Confederate monuments have ended up after being removed from parks and other public locations are in cemeteries dedicated to Confederate soldiers.

There have so far been no suggestions of creating parks where these statues can be displayed collectively – like in the countries of the former Soviet Union, where outdoor exhibitions in cities have been constructed to house massive busts of Lenin, Stalin and Marx.

One of the logical places for some of these monuments would be museums, where experts say they can be preserved for history and as a teaching tool.

Not all museums, however, are willing to accept these monuments. The Smithsonian in 2017 flatly denied it was going to take the monuments that were recently removed from the New Orleans area.

While the majority of these monuments come from states that joined the Confederacy, there are a number of them in Union states and even in Washington, D.C.

House Speaker Nancy Pelosi on Thursday ordered the removal of portraits in the Capitol of previous House speakers who served in the Confederacy as part of an effort to “appropriately observe Juneteenth” on Friday. She also has called for the removal of 11 statues honoring members of the Confederacy from the Capitol’s National Statuary Hall Collection. While she can’t unilaterally have them taken down outright, she can have them placed in areas of the Capitol generally not visited by the public.

Pelosi did so before during her first stint as House Speaker when she had a statue of Robert E. Lee shifted from a prominent place in Statuary Hall near the House chamber to a room below known as the Crypt.

And it is not just memorials to the Confederacy that are being removed.

California legislative leaders announced earlier this week that an enormous statue of Christopher Columbus and Spain’s Queen Isabella will be removed from the Capitol rotunda in Sacramento, where it was installed in 1883.

“Christopher Columbus is a deeply polarizing historical figure given the deadly impact his arrival in this hemisphere had on indigenous populations,” Senate President pro Tempore Toni Atkins, Assembly Speaker Anthony Rendon, and Assembly Rules Chair Ken Cooley said in a statement. “The continued presence of this statue in California’s Capitol, where it has been since 1883, is completely out of place today. It will be removed.”

It is unclear where the monument will go.

Not all the monuments are going down without a fight.

Despite Virginia Gov. Ralph Northam saying recently that the state will remove an iconic statue of Robert E. Lee from Richmond’s prominent Monument Avenue, a judge on Thursday indefinitely extended an injunction preventing him from taking it down.

Richmond Circuit Court Judge Bradley Cavedo made the decision after hearing from attorneys for the state and for the plaintiff in a lawsuit against Northam. He gave the plaintiff another 21 days to refile a new complaint.

The statue has stood in a prominent spot along Monument Avenue since 1890 in what was once the capital of the Confederacy. Northam, a Democrat, ordered its removal earlier this month, citing the pain gripping the country over the death of George Floyd, a black man in Minneapolis who pleaded for air as a white police officer pressed a knee into his neck.

Richmond Mayor Levar Stoney announced earlier this month plans to remove the other Confederate monuments along Monument Avenue, which include statues of Confederate President Jefferson Davis and Confederate Gens. Stonewall Jackson and J.E.B. Stuart. Those statues sit on city land, unlike the Lee statue, which is on state property.

31 thoughts on “What Happens to Confederate Statues after they’re Removed?”