Check Out This Viral Avocado Hack 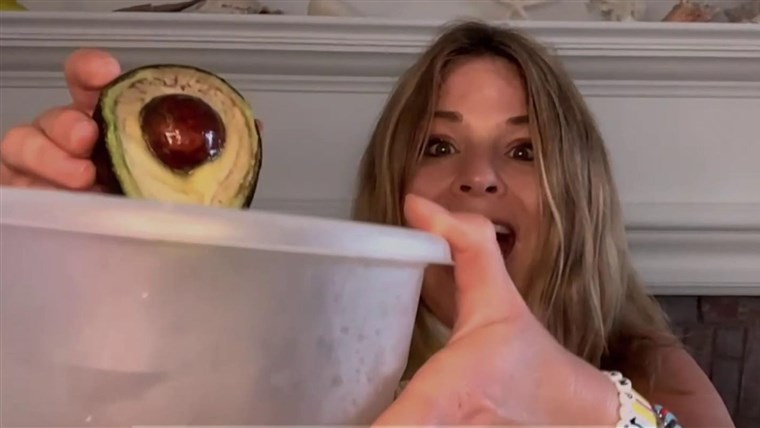 Many people love eating avocados, but one thing no one likes is how the creamy green fruit quickly turns brown after it’s been cut.

While there are many ways to keep avocados from spoiling, a new video on Tik Tok is wowing viewers with its simplicity.

Shared by Tik Tok user @kmag1, the hack isn’t new, but it doesn’t require any fancy storage devices or tangy citrus fruits. All you need is half of an avocado and a Tupperware or bowl filled with just enough water to submerge the exposed side of the fruit.

Then, simply place the avocado half in the bowl, cut-side-down, and the next time you’re ready to use it, the avocado should look like it was just cut.

In 2017, TODAY looked at six different methods for keeping avocado halves fresh. One of the methods involved submerging the avocado in a thin layer of water then covering the bowl (or Tupperware) with plastic wrap. While the method helped the avocado from turning super brown, the flesh itself was “water-logged and the texture was unpleasantly mushy.”

Trending stories,celebrity news and all the best of TODAY.

The woman who shared the new Tik Tok video did not specify how long this hack will supposedly keep avocados at their freshest, but that didn’t deter TODAY’s Jenna Bush Hager from trying out the trick this week.

During Hoda & Jenna on Wednesday, Jenna (who loves guacamole) expressed some hesitation about the trick.

“I’m worried about it getting a little soggy,” she said. “She says it lasts for a while, but we’re going to try it and check back in tomorrow.”

On Thursday, Jenna brought out her avocado submerged in water to show off the results.

The water in the Tupperware appeared to be quite brown and murky, however the avocado itself looked mostly green with just a few brown flecks.

“It looks good guys!” Jenna proclaimed. “I would eat this.”

Hoda agreed saying she would eat that leftover avocado any day.

“If you would’ve left that out or even just put it in the fridge with just a little Saran Wrap, it would’ve been brown,” she said.

Other methods to prevent avocados from browning include smearing the green flesh with lemon juice or olive oil, then wrapping it up.

Using a food-saving gadget can also help keep avocados fresh, but TODAY found that most models are better suited for highly acidic fruits and vegetables such as tomatoes or lemons.

Whether you’re saving that second half of an avocado for toast, guacamole or something else, giving this water-based hack a try is worth a shot.

One thought on “Check Out This Viral Avocado Hack”