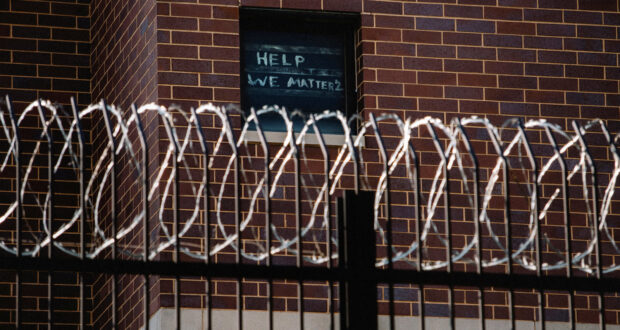 At least 100,000 people in prisons and jails across the country have contracted the coronavirus, according to data compiled by the New York Times. Nearly 800 inmates and staff have died.

Texas is now home to the three worst federal prison outbreaks in the country, according to the Bureau of Prisons. Between the three of facilities, FCI Seagoville, FMC Carswell and Beaumont Low FCI, there are over 2,100 cases of coronavirus and a few more than a dozen recoveries.

Cases of COVID-19 at Carswell, a federal medical prison in Fort Worth, have exploded in recent days—surging from 200 positive cases on Sunday to over 500 today. At least three women have died of complications with COVID-19. Carswell is the only medical facility for incarcerated women in the Federal Bureau of Prisons.

One of the inmates who contracted the virus at Carswell is NSA whistleblower Reality Winner, who says prison guards mock sick inmates and allowed a COVID-positive patient to spread the virus to a unit where dialysis and chemo patients live. “The officer went out of her way to come to my room and say, ‘I just wanted to congratulate you on your positive results’,” Winner wrote in an email sent early Monday to her sister Brittany, which The Guardian obtained.

Carswell is second to Seagoville in Dallas County, as the federal prison with the worst outbreak. Of approximately 1,800 inmates, 1,222 have contracted COVID-19. According to a local NBC affiliate, the BOP claims all institutions are equipped with tents and special areas for quarantined isolation, however, Seagoville is not currently using said tents.

On the outskirts of Houston, the third largest outbreak inside federal prisons is at Beaumont with 477 confirmed cases. Family members and loved ones of those behind bars at Beaumont plan to protest the prison’s conditions next Sunday outside the facility.

There have been at least 12,071 total cases of coronavirus reported among inmates in Texas, according to data gathered by The Marshall Project. The U.S. Bureau of Prison remains in the eighth phase of their coronavirus action plan, meaning all social visits and transfers, with limited exceptions, across federal prison facilities are suspended.

Inmates inside the Mississippi State Penitentiary at Parchman have resorted to setting fires and self-harm in order to receive help for injured or sick men, according to experts who investigated the conditions as reported by the Clarion-Ledger. Parchman, a maximum security prison with a legacy rooted in slavery, is involved in a number of lawsuits filed by inmates over the state of the facility, which includes spoiled or undercooked food, housing units covered in mold and without air conditioning, and undrinkable water that is “brown and foul-smelling.”

In addition, according to the Clarion Ledger:

“At least one medical expert believes that staff members sometimes falsely document that a patient has refused medical treatment. At times the refusal forms only have the signature of a correctional officer, in other cases the signature of the patient doesn’t match his signature on other forms.”

What started as warnings of unsafe and unhealthy conditions at an Indiana women’s prison has now turned into cries for help. According to the Indianapolis Star, women at the prison “have become severely dehydrated, lost consciousness or suffered seizures because their prison cells reach temperatures that are 10 to 20 degrees hotter than outside.” One prison employee called it a “ticking time bomb.”

“The temp does not break in the cool of the night, instead the brick cells act as insulated hot ovens,” one anonymous inmate the Indiana Women’s prison wrote in a letter.

In am afraid of dying by fire because of the ways the outlets blow in the summer,” another inmate wrote, “No one cares here about the heat in the cells nor the fire hazard posed by the cells being locked.”

Outbreaks of coronavirus at Detroit jails infected at least 83 inmates and 208 employees, as well as killed two doctors who cared for them. Per The Guardian, “The failures at the Detroit county jails echo those in neighboring Oakland county jail and across the US, including facilities in Miami; the notorious Angola prison in Louisiana; and California’s San Quentin prison,whereover 2,000 inmates have coronavirus and 10 have died.”

Over the past two weeks, COVID-19 has spread like wildfire at a Kentucky prison, killing three and infecting at least 168 inmates and 14 employees. The Lexington Herald-Leader reports, “The prison — which is primarily meant to hold medically vulnerable inmates — is Kentucky’s third state prison to have a major COVID-19 outbreak this year, following the Green River Correctional Complex in Muhlenberg County and the Kentucky Correctional Institution for Women in Shelby County.”

Every South Carolina prison has reported cases of coronavirus after a staff member at Ridgeland Correctional tested positive yesterday. As of yet, no inmates at the prison have tested positive for COVID-19. According to a press release from the South Carolina Department of Corrections, there are currently 484 inmates with active cases of coronavirus.

In Montgomery County, AL, the county jail system is experiencing a shortage of staff. Across Alabama, 14 of the 26 state corrections facilities have reported cases of coronavirus for a total of 164 inmate infections, according to the Alabama Department of Corrections. However, the state has tested only 651 of the estimated 22,000 incarcerated.

From Connecticut’s Hartford Courant, “Prison inmates who sued the state, claiming their confinement leaves them particularly vulnerable to coronavirus infection have settled after dropping a key demand – a substantial inmate release to reduce the prison population.”

Previous: Kris Jenner Breaks Social Media Silence After Kanye West’s Tweetstorm
Next: Oprah’s O is Over as A Print Magazine