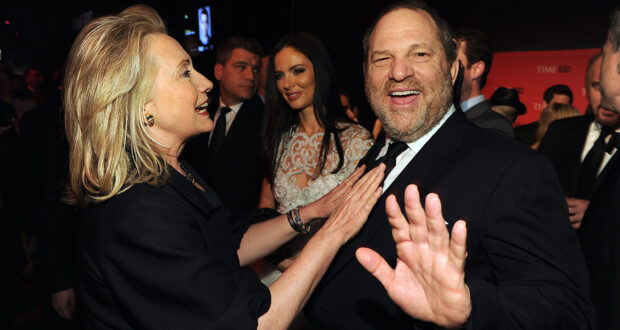 Weinstein, Epstein, and the Democrats

Just like any mob organization, political parties create protection rackets that cover for the misdeeds of miscreants who are useful to the party. Donors, organizers, friendly corporate elites, industry gatekeepers, and other party contributors are not mere ideologues; they pay their dues and expect something in return.

Parties leverage political pull to ensure that cases are never made against their clientele. Pay-to-play hummed along until Trump’s election saw these political underwriters go bust, exposing well-connected criminals to legal and reputational vulnerability.

After Republicans swept the 2016 election, the media and entertainment industries went into hysterics, having paid steep dues to an organization that could no longer protect them. New York and Los Angeles launched an offensive in the form of the Women’s Marches, events which claimed that Trump’s election had normalized sexual assault.

Of course, there would be no surge in sexual assaults during the Trump administration, but there was an avalanche of revelations that such crimes were commonplace — in the media and entertainment industries.

The case of Harvey Weinstein is infamous, but few know the full context. As a powerful movie producer and Hollywood gatekeeper, Weinstein was extraordinarily successful in collecting donations for the Democratic party from Hollywood elites. Knowing that his friends in high places would protect him, he would put naïve young starlets in compromising situations and sexually assault them.

Weinstein’s assaults were an open secret in Hollywood and were the subject of inside jokes, including one made openly five years earlier at the Oscars. The New York Times had been aware of Weinstein’s crimes since 2004 and buried the story until they saw the dam bursting, printing it in October 2017.

Soon afterward, an audio recording was released of Weinstein admitting his sexual assault on Italian model Ambra Gutierrez, the actress wearing a wire at the request of NYPD one day after Weinstein had seized her breast. Weinstein’s confession and additional threatening behavior would have made a solid case in most districts but was doomed to fail in Manhattan. District Attorney Cyrus Vance Jr. squashed the investigation, unwilling to launch a legal attack on such a powerful contributor to the Democratic party.

Weinstein had been safe during the Obama administration and would have been safe under a Hillary Clinton administration, being one of Clinton’s largest campaign bundlers, but the unexpected Trump victory meant he was out in the cold. Julian Assange aptly summarized the dynamic on social media:

Would Sarkozy and Weinstein have fallen if Hillary Clinton had been elected president? Was the prospect of her taking power previously protective? Are there other figures who have had their protective matrix weakened who were once thought to be untouchable? If so, who?

The outpouring of sexual assault accusations prompted women to share their own stories on social media. The Democratic party moved quickly to fashion this burgeoning #MeToo movement into a feminist, anti-Trump weapon, with a moderate degree of success.

Feminists had long held that ‘rape-culture’ was widespread and it seemed the day of reckoning was nigh. The business world braced for a wave of legal woes by clamping down on after-hours fraternization and changing the corporate culture in a way that ended up freezing women out of traditional networking opportunities.

The #MeToo movement soured among women, the anti-male corporate witch-hunts having damaged their careers. The reckoning never came, at least for the business world, as ‘rape-culture’ seemed to be a Hollywood and journalism phenomenon.

Hollywood would not go down without a fight, attempting to get ahead of the #MeToo movement by creating Time’s Up, an artificial copycat movement with the support of Hollywood infrastructure, most notably the Creative Artists Agency.

Celebrities headlined Time’s Up and #MeToo events, claiming that sexual assaults were everywhere in society, but the film industry would soon be the exception. This defensive posturing was met with skepticism from the public as motives became transparent. Photographs surfaced of Weinstein present at the early 2017 Women’s March. Legendary actor Kevin Spacey was accused of sexually assaulting young boys.

Actress Asis Argento, who gave a rousing speech at the Cannes Film Festival claiming “even tonight, sitting among you, there are those who still have to be held accountable for their conduct,” was outed as a predator herself. Even the powerful Creative Artists Agency was accused of pimping young women to predators like Weinstein. Hollywood’s once-illustrious reputation was in ruins.

Hollywood’s protection of predators and pedophiles who made them money was an excellent lesson on privilege, but Americans were soon treated to a far greater one in the form of Jeffrey Epstein. Even before Epstein’s downfall, it had been widely known that he was a sex trafficker of women and children, using his “Lolita Express” to service (and blackmail) Hollywood, media, and Democrat party elite, with the help of his madame Ghislaine Maxwell.

Epstein suffered a minor setback in 2008 when local police from Palm Beach, Florida caught him abusing a 14-year-old girl at a massage parlor. The FBI swooped in for the rescue, offering Epstein a sweetheart plea deal which allowed him to serve less than 13 months without ratting out his clientele and with substantial work-release.

Epstein continued his trafficking ring for years to come until President Trump managed to confirm William Barr, a seasoned prosecutor willing to attack privileged criminals, as attorney general. Barr arrested Epstein after declaring Epstein’s FBI deal to be illegal. Seeing the writing on the wall, politicians, journalists, and celebrities implicated in the trafficking ring denounced Epstein and denied knowledge, having held their tongue for over a decade.

The public wondered what truths Epstein would spill but were soon disappointed. After prison guards found Epstein unconscious with strangulation marks on his neck, he was placed on suicide watch, only to be quietly removed from suicide watch, placed in an isolated cell, and strangled to death while the guards missed a mandatory checkup. Video footage from both strangulations had been destroyed and Epstein’s death was passed off as a suicide.

Legacy media organizations mocked the disbelieving public as conspiracy theorists until undercover footage from Project Veritas revealed that even journalists knew Epstein had been murdered. Furthermore, an ABC News story featuring proof that Prince Andrew, Bill Clinton, and other elites had been Epstein’s clientele had been killed after the royal palace had “threatened us a million different ways.”

The story of Epstein and Prince Andrew, entrusted to ABC by a victim of child trafficking who had spent 12 years in hiding, had been traded for an interview with Prince William and Kate Middleton and additional interviews guaranteed to ABC for years to come.

Why Epstein’s case took so long to get made, why he was rescued by the FBI, and why he was permitted to continue operating is no secret. He was useful, but who for? Was he a blackmailer working for the Democratic party, an FBI asset, or both? The collusion between American intelligence agencies, political elites, and foreign royalty to rape American children should remind every American that privilege exists in being useful to entrenched powers, not in identity politics.

With the recent arrest of Epstein’s madame Ghislaine Maxwell, the case has received renewed attention. Will Attorney General Barr seize evidence from ABC News, subpoena former presidents and princes, and conduct a scorched-earth campaign to bring justice to the world’s most privileged, or will Maxwell die of asphyxiation in a lonely prison cell?

Previous: Steve Harvey Drops F-bomb Over This Response
Next: Who’s afraid of Ghislaine Maxwell? Everyone on this list