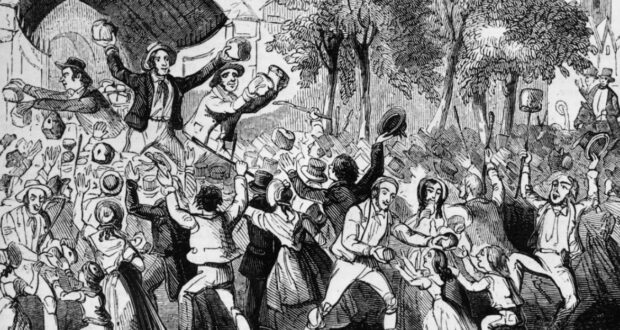 Are Bread Riots Coming To America?

Over the last week, just under 1 million people filed for ordinary unemployment benefits, plus another half-million under the special pandemic unemployment program for people who don’t ordinarily qualify, a substantial decline from some of the numbers seen since the beginning of the pandemic. At this rate, by mid-September or so, new unemployment claims will be merely as bad as they were during the worst of the Great Recession.

Those unemployment benefits, however, because this country has systematically stripped and sabotaged its safety net, are extremely meager and often nearly impossible to actually get. Hundreds of thousands of private citizens who have lost their jobs are flocking to Reddit for help and advice, as state unemployment bureaucracies are so janky and swamped they often can’t deal with the flood of applications.

In the past week, the r/unemployment subreddit has taken a dark turn with the expiration of the CARES Act’s super-unemployment and the failure of Republicans to even come to an agreement about what they want in the next round of pandemic relief. It’s become a de facto support group for people whose lives are collapsing around them for a simple lack of income or jobs, and talk of suicide is common.

One wonders: Is America about to see bread protests or even riots?

People around the country have been testifying how they are down to their last dollar or flat broke, facing eviction or living on the street, unable to afford vital prescriptions, or even food. “I’ve got $18.91 in my bank account this morning. My cupboards are getting low, my dog will have to eat whatever me and my kids eat and my gas light will be back on shortly,” wrote one Redditor recently.

“My car payment was due today and I’m still $200 short, 500 counting last month’s. My phone bill is due in a few days. I’m a month behind on the electric bill. I have about $60 to my name, I’m not going to make rent and my [landlords] have already said they will not be giving any allowances,” wrote another.

“Well I’ve waited and now my power turns off at the end of today, in a house where my entire family has moved in with me … worst of all I have two toddlers and virtually nowhere to go. ‘Rona and the government have picked off my family one by one and this seems to be the final nail in the coffin,” wrote a third.

And that’s the very tip of the iceberg — indeed, millions of people were left out of even the initial CARES Act rescue, and millions of more layoffs are likely to come in the next few months. The Center on Budget and Policy Priorities has collected data for the week ending July 21, before super-unemployment expired, and found that 12 percent of households were regularly short of food, 21 percent of renters were behind on their payments, and 28 percent of children were in households with one or the other problem. All that is certainly going to get much, much worse if another rescue isn’t passed.

Usually, governments get worried when their citizens are starving, especially when it would be easy to prevent. A severe food shortage is one thing, but when there is more than enough to go around, and the state could feed everyone simply and easily, most democratic countries choose to do so. A starving people might rise up in fury and overthrow the government, as happened in France in 1789.

Now, America has not seen much of this sort of unrest in the past, for a few reasons. One is our hegemonic individualist ideology, which indoctrinates the people into believing that any turn of bad luck is their fault. Another is our convoluted constitution, which isolates many politicians from democratic accountability.

It is possible to win the Electoral College and the presidency while losing the popular vote 4 to 1; most House seats are gerrymandered to be completely uncompetitive; Senate seats are apportioned in a ridiculously anti-democratic fashion — and two-thirds of the Senate isn’t even up for election in any given cycle anyway.

Politicians like Senators Ted Cruz (R-Tex.), Rand Paul (R-Ky.), and Ron Johnson (R-Wisc.) — who have complained at the amount of proposed relief spending; Johnson actually celebrated the breakdown of negotiations — display an utter disregard for the welfare of their constituents because they have indoctrinated themselves with the ideology of Herbert Hoover and because none of them can lose in November. Paul and Johnson will not face the voters until 2022, and Cruz not until 2024.

But simple voting is only one aspect of democratic freedom. Another is the right to assemble and petition the government for a redress of grievances. And the coronavirus pandemic is so obviously not the fault of anyone on unemployment that one can see American individualist ideology starting to crack in real-time, including on r/unemployment.

“Should we just take it upon ourselves to start protesting outside of every single one of their houses?” one Redditor speculated recently. Such a protest did indeed happen on Tuesday outside of Senate Majority Leader Mitch McConnell’s house in Kentucky. “Mitch better have my money,” people chanted.

Demanding a handout from the government is difficult for many Americans because we are trained from birth to “look out for yourself” and not expect help from others. But the fact is that nobody can actually look out for themselves. Interdependence is simply a fact of life in any complex economy.

We all depend on state-created laws, regulations, subsidies, and policies — and none more so than the rich, who are collecting government cheese in about a thousand subtle ways. It is absolutely within the rights of the people to demand that their elected representatives make sure everyone has enough to eat and a roof over their heads at all times, not just in a crisis.

And when a Great Depression-scale disaster is allowed to fester for no reason, it is anybody’s guess what will happen. As we saw with this summer’s racial-justice protest movement, mass despair is just waiting for a spark to blow into a conflagration of rage. The result could easily spin out of anyone’s control.

The president and Republican members of Congress should fear the consequences of letting the American people drown a lot more than they currently do.