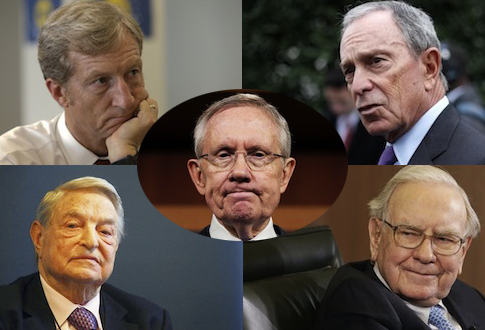 The right is celebrating the defunding of most of the NIH’s experiments using the body parts of murdered babies bought from Planned Parenthood.  Meanwhile, Congress is busy giving tens of BILLIONS of dollars more to develop a vaccine using patented cells harvested from aborted babies.

On 8/21/2020’s show, David Knight reports,  “Back in 2015, David Daleiden and the Center for Medical Progress exposed Planned Parenthood trafficking aborted baby body parts.  Kamala Harris, then California attorney general, didn’t investigate Planned Parenthood, she went after Daleiden for exposing their crimes instead.  But God works in mysterious ways, as part of this trial, it was uncovered that one of Planned Parenthood’s biggest customers was none other than Fauci’s NIH.”

“The NIH had approved 14 projects using body parts from aborted babies.  The good news is that President Trump created a ‘Human Fetal Tissue Research Ethics Advisory Board’ which stopped funding to 13 out of the 14 NIH projects.  Though the ‘ethics’ committee doesn’t want to get rid of all 14, they still want to use aborted baby body parts for that 14th one.”  Continued Knight

“‘Human Fetal Tissue Research Ethics Advisory Board’, is that an oxymoron or what.  How could there be anything ethical about the use of aborted human fetal tissue?  What kind of an ethical screening would allow any of them to go through?”

“The left is hopping mad that Trump would defund 13 of the projects.  A virologist at the University of Pittsburgh, Carolyn Coyne said, ‘This is a ban disguised as an ethics committee.’  They don’t want law or ethics, if they can make a pragmatic case for it, or just pay off a politician, they’ll get it.  And if it’s not taxpayer-funded, it’s the same as banning it.  She continues,  ‘So, the ‘ethics’ of research was decided by a largely Christian/Catholic, white panel.’  Science Magazine points out that the University of Pittsburgh is another one of Planned parenthood’s biggest customers along with the NIH.”

“Normally this would be good news, and I would be celebrating, but I’m not, and it’s not only because one of them got through.  At the same time these are being defunded, they’re spending $30 billion for a vaccine made with aborted baby body parts.  ”

“Let’s talk a little about the vaccines from an ethical standpoint.  AstraZeneca, Johnson and Johnson, a couple of companies at the front of ‘Operation Warp Speed’, are making COVID vaccines using cells from aborted babies.  I call it the ‘cannibal vaccine’, and it’s being funded by the Trump Whitehouse.  Trump is bragging about this, ‘it’s going to be huge’, and he’s spending a huge amount of money on it too.  Congress has approved $20 billion more, in addition to the $10 billion we’ve already freely given them.  We’re paying for the development of these unethical cannibal vaccines that’ll be forced on us.  We’ll be forced to buy them. too. Two $60 doses to start with.”

“They can patent the cells harvested from aborted babies, that’s another reason they don’t want you using your own stem cells.”

“So the good news is, they’re stopping 13 of 14 nazi science experiments, I guess that means the new ethics board is 93% ethical.  The bad news is, we’re giving these people $30 billion to use aborted baby body parts to make the vaccines they’ll be forcing on you,”  concluded Knight.