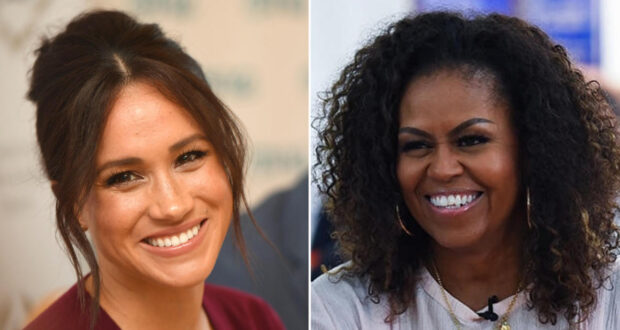 Meghan Markle, the Duchess of Sussex, will help encourage eligible women to register to vote in the U.S. as part of a Thursday night event with an organization launched by former first lady Michelle Obama.

Markle is one of the special guests at When We All Vote’s “When All Women Vote #CouchParty” event, which aims to reach 300,000 eligible female voters in honor of the passage of the 19th Amendment giving some women the right to vote.

Other guests include former Obama White House aide Valerie Jarrett, who is a When We All Vote board chair, Glamour editor-in-chief Samantha Barry and actress Yvette Nicole Brown.

Volunteers will text eligible voters about registering to vote, the organization said.

When We All Vote’s “week of action” includes various events starting Tuesday to celebrate the women of color who fought and continue to fight for the right to vote since the passage of the 19th Amendment.

Obama helped launch When We All Vote in 2018 with a goal of boosting participation in elections.

Markle said in a feature in Marie Claire’s August digital issue that she plans to vote in the November election.

“I know what it’s like to have a voice, and also what it’s like to feel voiceless,” she said. “I also know that so many men and women have put their lives on the line for us to be heard. And that opportunity, that fundamental right, is in our ability to exercise our right to vote and to make all of our voices heard.”

While Markle did not say in the interview whom she will support, she publicly voiced opposition to President Trump before joining the royal family in 2016. She called him “divisive” and “misogynistic.”

Markle married Prince Harry, who is sixth in line to the British throne, in 2018. Earlier this year, the couple announced their decision to step down as working, senior members of the royal family, and relocated to Los Angeles.

Previous: Restaurant in China Weighs Diners Before Telling Them What They Can Eat!
Next: Cannibal Billionaires: Harvesting Babies for Vaccines