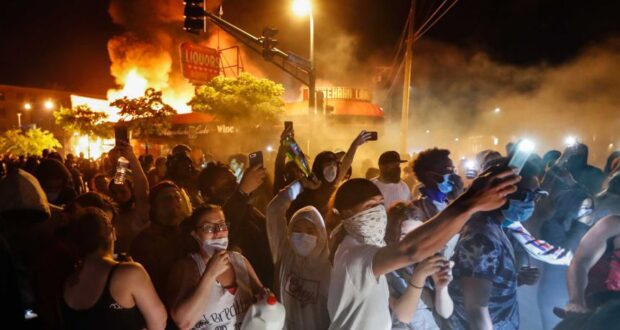 The Left Cancels The Word “Riot”

During the 1960s – the last period of even worse social unrest – we had two especially useful words – “demonstrations” and riots” — and we understood the difference.

Democrat leaders and their left-wing media allies seem to have put the word “riot” on the list of banned terminology.  In those “days of rage,” the words were used to accurately describe such assemblages.  If the folks were peaceful, we called it a “demonstration” or “protest” – often preceded by the adjective “peaceful.”  If property was damaged or vandalized, buildings burned or bombed, shops looted, shots fired,  and police and citizens attacked, it was universally called “a riot.”

In most cases, that was the enduring descriptive, along with the location (usually a Democrat-controlled city) – such as the Los Angeles Riot, the Chicago Riot or the Baltimore riot.  There were scores of such riots in the last half of the Twentieth Century – and hundreds since the founding of the Republic.  The majority were the result of racial injustice – commonly called “race riots.”

I cannot recall a time when such violent outbursts were described as peaceful demonstrations – until recently.  It is understandable if a small cadre of crazy radicals attempt to downplay the events on the street – or give them a cloak of justification.  But when the same spin — designed to aide, abet and further encourage these violent outbursts — comes from leaders and activists in the Democratic Party and from the most prominent personalities in the news media, it is shocking.

Recently, CNN’s Omar Jimenez reported that the unrest in Kenosha, Wisconsin was initially peaceful until “things began to get a little bit more contentious.” He gave his report as buildings behind him were being burnt to the ground – and the chyron at the bottom of the screen read, “Fiery but mostly peaceful protests after police shooting.”  It was neither a peaceful nor fiery “protest.”  It was a “riot.”

Jimenez proceeded to intimate some sort of parity between the rioters and the police, saying “Things were thrown, back-and-forth.  Police started using some of those crowd dispersal tactics like tear gas, even playing very loud sounds to push them out.”

In an earlier commentary, I reported on MSNBC propagandist Ali Velshi, who – like Jimenez – described the Minneapolis riot as “peaceful” even as buildings burned behind him.  And these are not two outlier examples.  Avoiding the word “riot” for such terms as “mostly peaceful” is so common in the left-wing newsrooms that it is impossible to believe it is not intentional and strategic.

If they can give license to individual burning and looting, you can understand why they see lessor vandalism as perfectly acceptable and peaceful.  If you break a few windows as you march, spray paint some statues (or even topple them) or shine lasers in the eyes of police officers – the left sees no violence.

Don’t you sometimes wish that people like Jimenez or Velshi would be on the receiving end of some of that non-violence?  I should seek forgiveness for the thought, but sometimes …

Previous: Rosie O’Donnell Has ‘Compassion’ for Ellen DeGeneres
Next: US Troops Injured In Collision With Russian Military