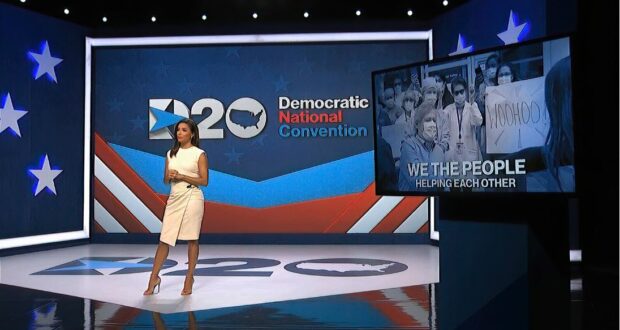 While bashing President Donald Trump is fashionable in the liberal press and social media monopolies, We the People have spoken – without saying a word. Viewer ratings showed expected audience participation was down by half on the first night of the Democratic National Convention compared to 2016.

This year’s four-day Democratic National Convention (DNC) has already been termed a “media disaster.” A writer for ZeroHedge watched the pre-recorded speeches that made up most of the program and said the experience was as “exciting as an infomercial.”

Even liberal luminaries Michelle Obama and Bernie Sanders couldn’t tear folks away from doing something more important or interesting.

Small wonder when she makes ridiculous and untrue statements such as this doozy:

“Let me be as honest and clear as I possibly can: Donald Trump is the wrong president for our country. He has had more than enough time to prove that he can do the job but he is clearly in over his head. He cannot meet this moment. He simply cannot be who we need him to be for us.”

That’s right, forget the booming economy (despite job losses created by the Democrats put in charge under a National Health Emergency) and Trump’s record of keeping his campaign promises. The former First Lady (whose birth gender is still in question) lives in a fantasy world of negative thinking and rude emotions.

Just how low can public interest go in this group of people dedicated to spewing Socialist venom?

In a nation of just over 330 million people, the DNC captured the attention of 11.6 million prospective voters, as reported by ZeroHedge. That works out to 35 viewers out of 1000 people.

The 2020 DNC (D20 for short) has stumbled along all summer long. The event was slated to be held in Milwaukee, Wisconsin, during the week of July 13, but postponed after the Democratic leadership overreacted to the false data provided at that time by the World Health Organization (WHO) and the U.S. Centers for Disease Control and Prevention (CDC).

The 17,000-seat Fiserv Forum was supposed to host expected convention mobs but the fear-mongering Dems downsized the event to a smaller venue: the Wisconsin Center with its 4,500-seat theater and 12,000-seat arena.

In June, DNC organizers contacted delegates, asking them not to attend the whip-up in person. No speakers arrived from outside the area.

That platform apparently has planks favorable to these important social issues:

With shock videos of Black Lives Matter (BLM) and Antifa (anti-fascists) gangs dragging white people out of their cars only to beat them unconscious, even die-hard Donkeys are having trouble walking this plank.

Heck, even the die-hard Donkeys are criticizing the DNC, their own organization. in an Instagram post, uber-leftist Rep. Alexandria Ocasio-Cortez bemoaned the fact that she wasn’t the center of attention or major shot-caller – and she played the race card:

The junior Congresswoman was implying that there is no need to pitch diversity to minority voters because their votes are “in the bag.” Targeted now are the undecided white swing voters.

For a political party that preaches an end to cultural inequalities, their actions and race-conscious attitude exposes the truth. These people are racist. They hate whites. But they’ll grab any stray votes from those still confused about the power plays being made in the country right now.

DNC organizers failed to invite one minority group to their party: followers of Islam. Was this because the religion preaches death to the infidel – all non-believers? AOC pouted on Instagram:

“Muslims had ZERO representation which is just utterly crazy to me — we need the turnout Ilhan [Omar] and Rashida [Tlaib] delivered in their primaries.”

The DNC is being promoted as a virtual conference with two hours of prime-time programming from 9-11 pm ET for the four nights of the convocation. Each night has its own special theme:

On the fourth night of the DNC, Joe Biden will accept his nomination – virtually, of course. He will address his dwindling fandom from a hush-hush location somewhere in Delaware.

Previous: Catastrophic Strike Ahead Near Louisiana and Texas Border
Next: Rosie O’Donnell Has ‘Compassion’ for Ellen DeGeneres