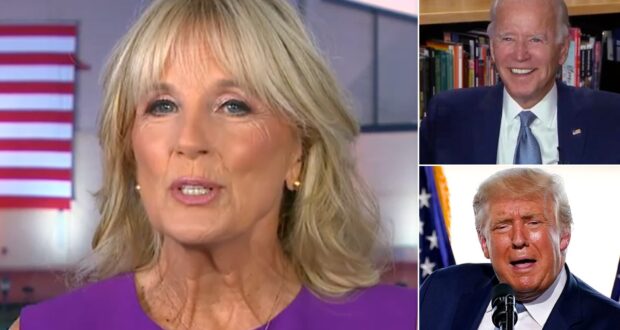 ‘Can Men Be Women?’: Jill Biden Ripped Apart For ‘Vote For Science’ Tweet

The internet noticed the disconnect and pummeled Mrs. Biden with questions pertaining to science and the Democrats and her husband’s platform.

Cool! What’s your definition of when life begins. https://t.co/UORhfTR1uU

Back in June, the former VP, once a self-described pro-life Democrat, staked out a far-left position on abortion, stating that he supports abortion “under any circumstance.”

“Women’s health care rights have been under attack as states across the country have passed extreme laws restricting women’s constitutional right to choice under any circumstance,” Biden said in a statement, lauding the Supreme Court for its decision in June Medical Services v. Russo. “Today the U.S. Supreme Court reaffirmed that states cannot put in place laws that unduly burden a women’s right to make her own health care decision with her doctor.”

Embryology and biology or…? https://t.co/w3iKhF61hx

“Can a man be a woman?” McCullough posted.

Can a man be a woman? https://t.co/nGGnzvB4qy

Can men be women? https://t.co/plsJT6KhIi

“How many genders are there?,” commented conservative writer Jim Treacher.

How many genders are there? https://t.co/4Y1CSGth2J

“Weird flex considering Democrats hate President Trump so much they’re peddling a bizarre, baseless conspiracy theory about a coronavirus vaccine rather than listening to the *scientists* who say a vaccine will be safe and effective,” said Jake Schneider, deputy director of Rapid Response for the Trump campaign.

Weird flex considering Democrats hate President Trump so much they’re peddling a bizarre, baseless conspiracy theory about a coronavirus vaccine rather than listening to the *scientists* who say a vaccine will be safe and effective. https://t.co/kQOUKnk0m0

Earlier this month, Biden’s running mate Sen. Kamala Harris (D-CA) “promoted what is being called a ‘dangerous conspiracy theory’ about a potential coronavirus vaccine on Saturday, suggesting that the vaccine may not be safe due to it being rushed for political reasons ahead of the November elections,” The Daily Wire reported.

Asked by CNN if Harris will get a COVID vaccine if one comes before the election, the senator responded: “Well, I think that’s going to be an issue for all of us. I will say that I would not trust Donald Trump and it would have to be a credible source of information that talks about the efficacy and the reliability of whatever he’s talking about. I will not take his word for it.”

The former Second Lady posted her tweet about science on the same day Scientific American publicly backed her husband.

The Daily Wire continued: “The editors of Scientific American wrote that President Trump ‘has badly damaged the U.S. and its people — because he rejects evidence and science,’ citing his ‘dishonest and inept response to the COVID-19 pandemic” and snapping, “He has also attacked environmental protections, medical care, and the researchers and public science agencies that help this country prepare for its greatest challenges.’”

Scientific American has never endorsed a presidential candidate in our 175-year history—until now.

The 2020 election is literally a matter of life and death. We urge you to vote for health, science and Joe Biden for President.https://t.co/8TlH7shjFn