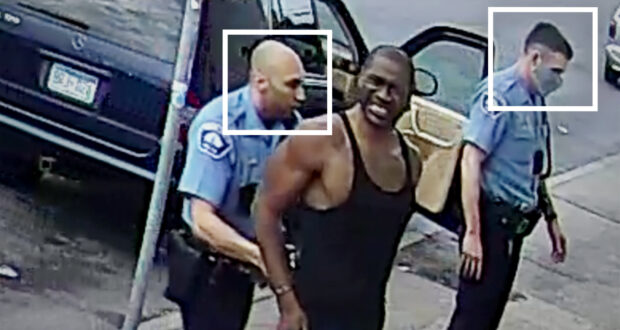 The footage has not been previously seen by the public. Does it shed any new light on the incident, or change the narrative surrounding George Floyd?

Judge Peter Cahill had previously ordered that the video could be privately viewed by the public starting on July 15, but no copies of the video were allowed to be released to the public. The footage was obtained and released by The Daily Mail earlier this month. The mainstream media has been quite silent about the implications of the footage.

The video starts with Officer Thomas Lane contacting Floyd as he was in his vehicle. Floyd ignored commands from the officer to show his hands and appeared to be reaching around in his car.

Officer lane drew his gun and repeatedly ordered Floyd to show his hands and Floyd continued to dig around.

“I’m sorry, I’m so sorry,” Floyd told the officer after showing his hands. “God dang man. Man, I got shot the same way, Mr. Officer, before.”

Floyd started sobbing and begged the officer not to shoot him as he resisted being pulled out of the car.

The officer finally convinced him to step out while Floyd continued to resist being handcuffed. Floyd’s ex, Shawanda Hill, can be heard calling out to Floyd to stop resisting.

Once Floyd was handcuffed, Officer Lane asked Hill if Floyd was drunk.

“No, he’s got a thing going on,” Hill said while making a circular motion at the side of her head.

The officers tried to reason with Floyd as he sobbed that he was claustrophobic and had anxiety. Eventually, it was Floyd who begged to be allowed to lay on the ground. While in the car, Floyd said several times, “I can’t breathe.” Floyd was crying out about his wrists hurting when he suddenly he lurched back to the edge of the doorway.

“I want to lay on the ground,” Floyd repeatedly told the officers. “I’m going down” Floyd said. “I can’t breathe.” The officer then moved him to the ground and held him down. We all know, and saw the repulsive scene that played out after that on the viral cellphone videos of the Floyd’s horrific death.

But, does this footage shed any new light on the tragic incident that saw the Twin Cities, and other places around the country erupt in flames and violence after Floyd’s death?

View the video here, and decide for yourself.

What do you think? Does this previously suppressed bodycam footage in any way justify the officer’s actions in the moments preceding George Floyd’s death? Reply in the comments below.

Previous: Meeting Extraterrestrials – Is COVID-19 Preparing Us?
Next: Tackling Conspiracies: How Much of 2020 has been Pure Coincidence?