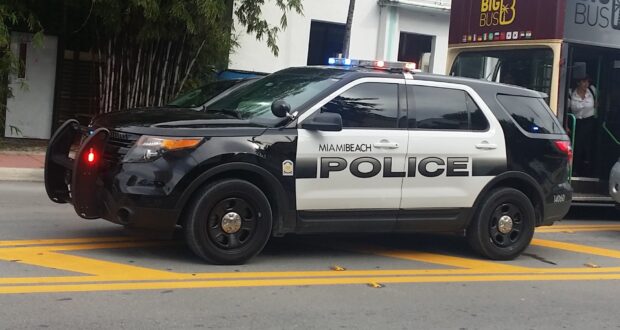 A hit-and-run in Miami Beach early Thursday ended with a BMW crashed in front of one of the city’s most well-known buildings. One passenger, who police say was carrying a loaded rifle, was arrested.

North Miami-Dade resident Blake Graham, 20, was arrested on charges of openly carrying a weapon and resisting an officer without violence.

No one was hurt in the hit-and-run in Miami just before 5 a.m. on 41st Street, also known as Arthur Godfrey Road. Police detained all four passengers in the BMW, but they only charged Graham. The scene cleared in time for the start of rush hour.

The BMW wound up nuzzling a tree in front of the Giller Building, a teal-colored building of medical professional offices that’s been a landmark at Alton Road and 41st Street since its 1957 construction.

The report says an officer spotted Graham 50 yards west, on the slice of Bay Road near the Julia Tuttle Causeway. He was trying to get into a car. When the car spotted the police cruiser, it zoomed away, leaving Graham holding an ATI Omni rifle in his left hand.Graham surrendered without more fuss.

Previous: ‘Everything in My Life Changed’ Jordyn Woods on Tristan Thompson Cheating Scandal
Next: Rush Limbaugh rips ‘The Rock’ for Biden endorsement: ‘Sold his show to China’