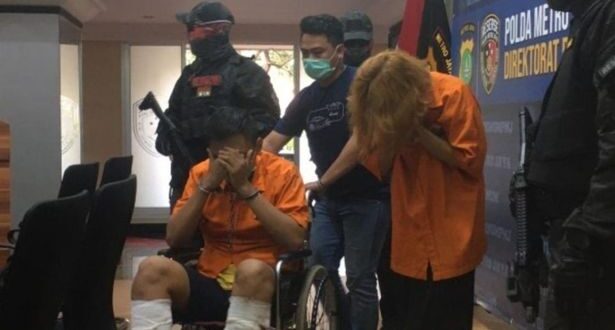 Man Stabbed to Death During Sex with Tinder Date

A Tinder date was stabbed to death while having sex with a woman and his body was then chopped into almost a dozen pieces, say police.

The 32-year-old man was lured to an apartment by a couple who targeted him because they thought he was rich. They now face the death penalty if convicted.

As the victim had sex with a 27-year-old woman, her 26-year-old boyfriend, who was hiding in a bathroom, emerged and began to bludgeon the man with a brick, according to police.

The man was then stabbed repeatedly until he died at the flat in Jakarta, Indonesia.

After killing the man, the couple didn’t know what to do with his body, so they went out and bought a machete and saw, and began dismembering it inside the flat in Jakarta, Indonesia, police said.

The pair are accused of cutting the man’s body into 11 pieces, which were then wrapped in plastic bags and stuffed into two backpacks and one suitcase, the Coconuts news website reported.

The couple allegedly booked a ride-sharing car and took the dismembered remains with them to a different flat that they rented using cash stolen from the victim’s bank account.

The boyfriend was shot by police when the body parts were found at that home last Wednesday.

Police Chief Nana Sudjana said the woman, identified by her initials LAS, met the victim, RHW, on the dating app Tinder, and their conversation then moved to WhatsApp.

They agreed to meet and rented an apartment for five days, arriving on September 9, the day of the murder.

The woman’s boyfriend, identified as DAF, was lying in wait.

Shortly after arriving, the victim and the woman talked for a bit and then began having sex.

The police chief said: “(DAF) hit the victim with a brick three times, then he stabbed him seven times until he died.”

What crimes have been reported in your neighbourhood? Check with In Your Area.

He said robbery was the motive, as the suspects thought the victim was well off financially due to his job as a human resource development manager at a construction company.

After the murder, the couple drained the victim’s bank account of about £5,000, and used the cash to buy a motorcycle, gold, precious metals, and to rent an apartment, the police chief added.

It is alleged that the couple planned to bury the man’s remains.

The victim didn’t return home and his family reported him missing on September 12, three days after the killing.

Detectives traced his movements and that led them to the couple’s new home, where the victim’s mutilated remains were found last Wednesday.

The male suspect resisted arrest and was shot in both legs, said police.

The couple have been charged with premeditated murder and theft. If convicted of murder, they will face the death penalty.