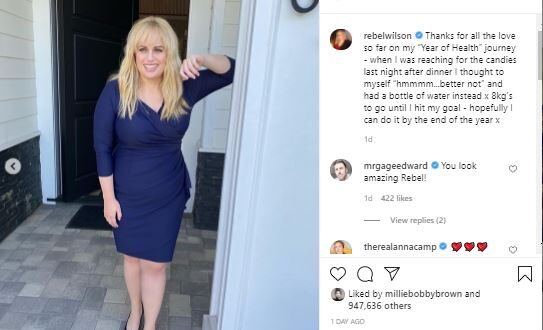 Over the last eight months, the actor has chronicled her weight-loss journey for fans and she just shared an exciting update: She’s close to her weight goal.

Over the weekend, the “Pitch Perfect” star shared a photo of herself rocking a blue wrap dress. In the caption, Wilson announced that she’s only got about 17 pounds to lose, and said she’s feeling more motivated than ever.

“Thanks for all the love so far on my ‘Year of Health’ journey – when I was reaching for the candies last night after dinner I thought to myself ‘hmmmm…better not’ and had a bottle of water instead x 8kg’s to go until I hit my goal – hopefully I can do it by the end of the year x,” she wrote.

The 40-year-old’s “Pitch Perfect” co-stars took to the comments to congratulate their friend on her achievement. “Rebs! Fire emojis!” Brittany Snow wrote, while Anna Camp chimed in with three hearts.

The star’s trainer, Jono Castano, showed his support for his client, commenting “What a journey it’s been … You got this girl.”

Wilson’s fans also sent some love to the actor, and one left this sweet comment: “You’ve ALWAYS been very beautiful, but congratulations on your weight loss.”

Back in May, Wilson gave fans an update on her weight-loss journey and admitted that it hadn’t been easy.

“I’ll be honest with you guys – with my ‘Year of Health’ mission I’m trying to get to 75kg’s and career wise am trying to get one of my movies into production before the end of the year! Both of these things are requiring a daily effort and there’s constant set backs – but I’m working hard,” she shared.

Wilson first declared that 2020 would be her “Year of Health” in January and has been giving fans a glimpse at her workout routine, which includes walking, boxing and more. The “Cats” star has reportedly been following the Mayr diet, which was initially developed by Franz Xaver Mayr in Austria in the 1920s.

The diet focuses on gut health and mindfulness while eating. Participants usually start their journey by visiting the VivaMayr resort in Austria, a place Wilson raved about in an Instagram post back in March.

Previous: US Troops Injured In Collision With Russian Military
Next: Are We All Aliens?