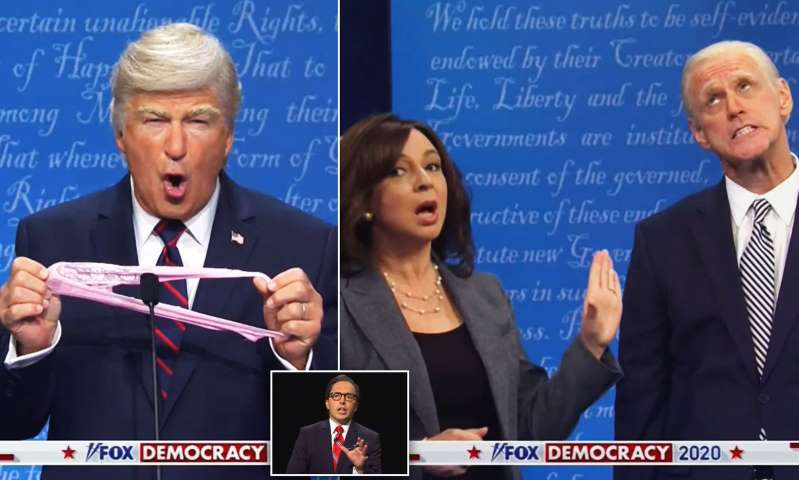 In the sketch, Biden gets meditation guidance from Harry Styles to keep his anger in check, Trump steamrolls over a helpless Chris Wallace, and Kamala Harris scolds both candidates as if they were children.

The cold open begins with a narrator introducing the debate, saying: ‘We thought it was important to see it again, since it might be the only presidential debate.’

‘And it was fun to watch – as long as you don’t live in America,’ the narrator added.

In real life, Wallace was widely criticized for not taking control of the debate, which deteriorated into a shouting match between the candidates as they frequently interrupted each other.

When Wallace asks Trump to keep quiet, he responds: ‘Tell that to my adderall, Chris.

‘Now let’s get this show on the road and off the rails.’

When Wallace asks Trump if he took a coronavirus test that he ‘promised to take in advance,’ the president answers: ‘Absolutely. Scout’s honor.’

© Provided by Daily Mail Carrey debuted his Biden impression. When he came out on stage, he sported Biden’s signature aviator sunglasses

In real life, Wallace said that there was no confirmation beforehand that Trump tested negative for COVID-19 before the debate and that an ‘honor system’ was in place assuming that the president was not ill.

The revelation raises questions about whether Trump, who is currently in a Maryland hospital receiving treatment for COVID-19, traveled to Cleveland for Tuesday’s debate while he was infected with the virus.

The president was hospitalized as of Saturday night at Walter Reed Medical Center in Bethesda, Maryland, where he is being treated for COVID-19.

In the sketch, Wallace tries to introduce Biden, but Trump keeps interrupting by jeering and laughing at Delaware, Biden’s home state, as ‘not even a real state.’

When Wallace introduces Biden, Carrey emerges while wearing aviator sunglasses that the former vice president is frequently seen with in real life.

Carrey will portray Biden this season – a role that has been played on SNL by the likes of Woody Harrelson and Jason Sudeikis.

The debate on SNL begins with Biden using a measuring tape to pull his lectern beyond six feet away from Trump, who has since tested positive for COVID-19.

© Provided by Daily Mail Harry Styles made a cameo, narrating a meditation tape in order to calm Biden down

© Provided by Daily Mail Trump’s meditation tape was a narration of the fiery speech given by Kimberly Guilfoyle, the former Fox News host who was spoofed in the sketch by cast member Cecily Strong

In the sketch, Biden brags that he has ‘46 fantastic ideas that I may or may not have access to’ – a reference to the perceived cognitive decline that has led some to question if the 78-year-old former vice president is too old to serve as commander-in-chief.

‘I’m holding my bladder. Let’s get at her,’ Biden says as he walks out to meet his foe, Trump.

In the SNL sketch, Trump expresses his excitement for his Supreme Court nominee, ‘Amy Cristina Barcelona.’

In real life, the nominee’s name is Amy Coney Barrett. The SNL sketch had Trump’s character confuse her name with the title of the 2008 Woody Allen film Vicky Cristina Barcelona.

‘It was so nice to welcome her with open arms and uncovered faces,’ the SNL parody version of Trump says in the sketch.

The joke was a reference to the White House reception for Coney Barrett held last Saturday, an event which is now thought to be the ‘super spreader’ that may have resulted in COVID-19 infections of several who attended.

© Provided by Daily Mail Harris then appears to bring order to the out-of-control debate, while remarking that America needs a ‘WAP – woman as president’

In the SNL sketch, Biden continues to calm himself down as he is repeatedly interrupted by Trump, saying: ‘Just flash that smile they taught you at anger management.’

When Wallace tries to ask Biden another question, Trump interrupts again, saying that ‘he won’t answer any questions about his son, Hunter, and Burisma, and the mayor of Moscow, and Obama spying on me.’

Wallace tries to get the debate back on track by directing a question to Biden.

When Trump interrupts again, Biden replies: ‘Will you just shut up, man?’

During the real-life debate on Tuesday, Biden angrily told Trump to ‘shut up’, at one point calling him a ‘clown’ and ‘the worst president’ in US history.

In the cold open, Biden breathes into a brown paper bag to regain control of his emotions.

After calming himself down, Biden then starts talking but loses his train of thought.

It is then Trump’s turn to speak. He speaks about the importance of ‘law and order’ and ‘facing the consequences of one’s actions.’

When Wallace brings up Trump’s taxes, the president says: ‘There have to be exceptions, Chris.’

‘Law and order is a very vague term and rules are meant to be broken.’

In real life, Trump’s tax returns are being sought by prosecutors in New York who suspect the president may have committed fraud in his private business dealings.

In the SNL sketch, Trump brags about flouting the rules regarding wearing masks.

‘I’ve got my mask right here,’ the president says before pulling out a pair of pink thong underwear.

In order to keep his emotions in check, Biden then starts to listen to a meditation tape narrated by Harry Styles, who makes a cameo on the show as himself.

Trump then listens to his own meditation tape, though this one is narrated by Donald Trump Jr’s girlfriend, former Fox News host Kimberly Guilfoyle.

Guilfoyle is played in the sketch by cast member Cecily Strong, who does a hilarious impression of the fiery speech that was given on the first night of the Republican National Convention.

While shouting at the top of her lungs, Strong spoofs Guilfoyle, saying: ‘Ladies and gentlemen, leaders and fighters for freedom and liberty and the American Dream, the best is yet to come!’

Wallace tries to restore order, saying: ‘Mr. President, if you keep interrupting this debate, I’ll do absolutely nothing about it.’

‘I’m not going to be distracted anymore by this clown tonight,’ Biden says.

As the former vice president goes into a monologue, he is distracted by a laser pointer that Trump is aiming at him.

When Wallace asks Trump to stop, the president says: ‘It’s not a laser pointer. It’s a wand that cures the COVID.’

At this point, Senator Kamala Harris, Biden’s running mate, who is played in the sketch by former permanent cast member Maya Rudolph, emerges from backstage.

‘You do not treat my Joe like that,’ Harris tells Trump.

After the president apologizes, Harris says: ‘America needs a WAP – woman as president.’

‘WAP’ is also the title of a recent hit song by Cardi B.

© Provided by Daily Mail ¿This November, please get on the Biden train, which is literally a commuter train to Delaware,’ Biden says. ¿We can all make America not actively on fire again.¿

A fed-up Biden then uses a remote control to ‘pause’ Trump.

Biden then wonders if ‘science and karma could somehow team up and send us all a message about how dangerous this virus could be’ by having the president infected with COVID-19.

He then looks over at Trump, who is still frozen.

‘I’m not saying I want it to happen,’ Biden says. ‘Just imagine if it did.’

‘This November, please get on the Biden train, which is literally a commuter train to Delaware.’

He adds: ‘We can all make America not actively on fire again.’