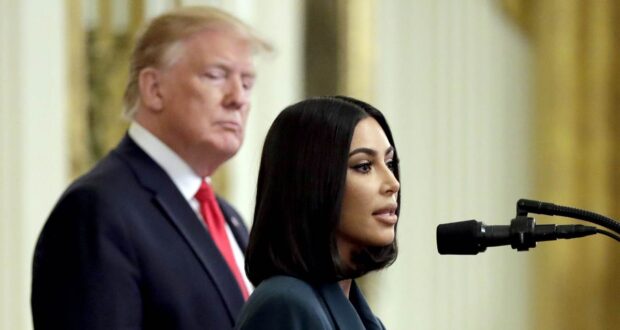 Kim Kardashian Refuses to Badmouth President Trump After Their Work Together

Kim Kardashian revealed she had been warned that her reputation as a celebrity could be damaged if she associated with President Donald Trump on prison sentencing reform.

The “Keeping Up with the Kardashians” star famously visited the White House in 2018. She convinced the president to commute the sentence of Alice Johnson, a great-grandmother who was serving a life sentence for a nonviolent drug conviction.

‘Don’t you dare step foot in that White House’

Speaking during an interview with David Letterman for his long-form Netflix series “My Next Guest Needs No Introduction,” Kardashian explained that her passion for criminal justice reform runs beyond politics. “Hopefully, for the next multiple administrations, I’ll be working with the White House, helping them with clemencies,” she said, according to The Daily Beast.

Letterman reportedly pressed her on how she feels about working with Donald Trump at a time when celebrities far-and-wide are criticizing his administration and character, including him.

Kim Kardashian said she was warned that working with President Donald Trump could damage her reputation.  “Trust me, everyone called me and said, ‘Don’t you dare step foot in that White House or your reputation is done,’” Kardashian said.

Which candidate does Kardashian support?

As she has continued to do throughout Trump’s time in office, Kardashian refused to say a bad word about him or publicly state who she supports in the upcoming election. Letterman continued to try and get a political stance out of the reality TV star, who simply responded to his rebukes of Trump by saying, “I understand that.”

“But see, your good work is overwhelming,” Letterman states. “It’s a positive force that diminishes what I consider to be unacceptable behavior by the president.”

Kardashian responded by simply saying that she is “extremely grateful” for the administration’s decision to work with her on an issue that’s close to her heart as she continues to study law and advocate for reform.

This isn’t the first time that Kardashian has discussed the inherent risk involved with working with the president as a Hollywood star. She previously told CR Fashion Book that her activism is motivated by a desire to set a good example for her kids she shares with rapper Kanye West.

“I’m raising four Black kids in this society and our system is so discriminatory against black and brown people. I want to do as much as I can to make their lives easier,” Kardashian said at the time (via TooFab). “I never knew much about the system until I started to dig in, and once I learned and saw how many things were wrong, I really couldn’t stop.”