Home » Politics » Latinos May Hold the Answer to Election Winner 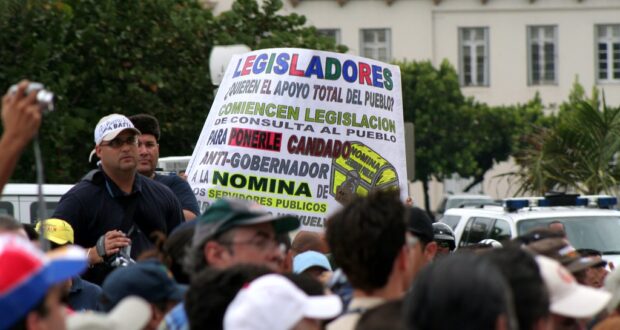 Latinos May Hold the Answer to Election Winner

In Siler City, where poultry trucks scatter feathers on the roads, Janet Pulido knocked on doors in a heavily Latino mobile home park on a recent autumn weekend, hoping to get out the vote.

At Interfood Plaza Latina in Raleigh, Sarahi Gonzalez held a sign in Spanish that read, “Register to vote here. Citizen? Over 18?” The first person the 18-year-old registered to vote that evening? Herself.

Across town, during halftime on a patchy grass soccer field — with the Honduran and Salvadoran teams tied — Sandra Amado Gómez and her daughter rushed to register young spectators. They signed up four.

In this presidential battleground, as in much of the South, politics are typically viewed through a prism of Black and white. But Latinos have become an increasingly important constituency in North Carolina. In the last three elections, it has been one of the most closely fought states in the country. Polls suggest the race for the White House is once again a toss-up.

Although Latinos account for only 4% of registered voters in North Carolina, they are a force that could tip the 2020 contest. From 2012 to 2017, the number of eligible Latino voters in the state increased by nearly 50%, more than twice the growth nationwide, according to Carolina Demography, a research group at the University of North Carolina at Chapel Hill.

That part of the population has shifted from being mostly foreign-born to one that is majority U.S.-born. “That is the generational change that’s beginning to happen,” said Paul Cuadros, an associate journalism professor at UNC Chapel Hill. “This is not an immigrant community, this is a settlers community.”

Dozens of grass-roots groups have taken notice, teaming up to register voters — specifically children of immigrants — at taco trucks, soccer games, and restaurants such as Boricua Soul, which serves up “Southern Latino” flavors. Organizers are reaching out within their own families when unable to knock on doors due to the pandemic.

“The Latino youth vote will make the difference in NC.”

The state’s oldest Spanish-language newspaper featured this truth on the front page last month. “We anticipate North Carolina being a fairly competitive state,” said Rebecca Tippett, founding director of Carolina Demography. “Obviously in a tight race when you’re talking about a few hundred thousand Latino voters … those voters can have a significant impact on the election.”

Starting in the 1990s, many Latinos were drawn to North Carolina because of jobs in agriculture and food processing. Poultry plants in Siler City have turned this once majority-white city to one that is now 42% Latino, according to census data. Located about 50 miles from Raleigh, Siler City is where urban turns rural and Confederate flags start to appear. On the way into town, a sign reads “Jesus is my savior, Trump is my president.”

Along with tractor supply stores, there are carnicerias, pupusa food trucks, and churches. One church, St. Julia, is where Pulido, now 19, had Spanish Mass for her quinceañera. A billboard in Spanish and English touts jobs at the poultry plant where Pulido’s mom works.

But the changes didn’t come without growing pains. When Latino students at the high school wanted to start a soccer team, they were met with resistance from the administration, according to UNC’s Cuadros, who moved to Siler City in 1999 to report on the emerging Latino community.

Residents weren’t ready to embrace what they regarded as a “foreign sport.” Cuadros eventually founded the soccer team in 2002. Two years later they won the state championship.

There was such a boom in migration that former Ku Klux Klan leader David Duke visited Siler City in 2000 for an anti-immigrant rally. Immigration, Duke warned the crowd, would “destroy the foundations of this country.” “I came here because Siler City is symbolic of what is happening in America,” Duke said, according to the Greensboro News & Record. “Your battle here is America’s battle. Your future is America’s future.”

Children who had yet to be born when Duke addressed hundreds in front of city hall are now grown. They have watched their town and state demographics change.

The fight is far from over

For all that change, Duke’s words have never really gone away. Two decades later, they’re echoed in the words of President Trump, who launched his candidacy by labeling Mexican immigrants as “criminals, drug dealers, rapists.” For Pulido, that charge felt like an insult to her family. Her mom immigrated from Veracruz, Mexico in 1999. Today, her mom and seven of her mom’s siblings live in Siler City.

Pulido can count the country songs she knows on one hand, but her love of sweet tea and the “y’all” she slips into conversation gives her away as Southern. On a recent Sunday afternoon, Pulido knocked on doors with Alirio Estevez, leader of Voto Latino Chatham, a Chatham County organization working to get out the Latino vote. Outside mobile homes at Country Living Estates, she recognized the hojas de platano, banana leaves, her family uses to make tamales.

“I was wondering if you or anyone in your household was eligible to vote,” Pulido asked an 18-year-old who stood on her front porch, dressed in a blue soccer uniform. “I’m eligible to vote,” the young woman said. But she wasn’t registered. “Latinos, we don’t vote a lot and that’s why the politicians don’t care about us,” Estevez chimed in. “You need somebody to take care of young people and your family. The best way to help them is to vote.”

As the young woman wavered, Estevez made a final plea: “It takes less than five minutes.” She agreed. Thirty minutes in, Pulido and Estevez had registered one 18-year-old and found two others who were interested. When they found people unable to vote because they lacked legal status, they were often told by the parents about their son or daughter.

The next weekend they signed up three people, two 18-year-olds and a woman in her 20s. In her own family, after a cousin turned 18, Pulido tracked him down and registered him. Her family plans to vote together. “We need to help our family. Not just our family, our neighbors. We need to be their voices,” Pulido said. “We have the privilege to do so.”

“Donald Trump won North Carolina by 3.6% in 2016,” Democratic National Committee Chairman Tom Perez said in a virtual “Todos con Biden Get Out the Vote” rally. “Latinos alone can be the difference maker.”

Sarahi Gonzalez wants to help make that happen. Until she turned 18, her dad was the only person in her family who could vote. Her Friday evening spent outside of the market in Raleigh was her first time registering Latino voters through El Pueblo, a nonprofit organization that focuses on leadership development in the city’s Latino community. The El Pueblo volunteers, many of them 17 and pre-registered, offered hand sanitizer and white cloth masks as Camilo Sesto played over the speaker outside. They provided information on absentee ballots and early voting schedules. “A lot of our generation cares about these politics and helping out our community, as well as making the country better,” Gonzalez said. “I feel like a lot of younger people like me will obviously vote this year.”

On a nearby soccer field, Néstor Gómez took a video as La Selecta players held a Salvadoran flag and placed their hands over their hearts for “Himno Nacional de El Salvador.” Eleven years ago, Gómez began covering Hispanic soccer leagues through News Latino Today, his community digital news outlet. The Argentine immigrant has seen the player’s children grow up and join the leagues and now he’s hoping to get them to vote. During halftime, his wife, Sandra Amado Gómez, and 14-year-old daughter, Aylen Agostina Gómez, wore shirts that read “Tu voto es tu voz” (Your vote is your voice) and walked around the metal bleachers with clipboards. “We need you to vote,” Amado Gómez urged one man. “For Trump,” he asked, before he and his friends broke out laughing. (Several other spectators made the same joke.) “For whoever you want,” she said.

Latino voters on the other side of the spectrum

The same weekend, about 60 miles from Raleigh at Ace Speedway, a breeze rippled “Trump 2020” and “Keep America Great” flags flying from the back of Ram 2500 and Ford F-350 pickup trucks. Of the hundreds of Trump supporters gathered at the Alamance County racetrack, which was temporarily shut down in the summer after it defied the state’s order against outdoor gatherings of more than 25 people, few wore masks.

Even fewer in the audience were Latino. That included Venezuelan immigrant Omar Lugo, who this year started the six-member group Latinos for Trump of Alamance County. Only 14% of Latinos are registered as Republican in the state and 42% Democrat, according to Carolina Demography. “Being an immigrant, being a former refugee, being a Latino, I tell you what, yes, we need to build that wall,” Lugo told the crowd. “We need to protect our home.” Lugo talked about his homeland and his fierce desire to keep the U.S. from being destroyed by communism. Over the past months, Lugo has knocked on doors and said he’s helped Latinos switch to the Republican Party.

The Florida transplant blamed media manipulation for labeling Trump as a racist.

“Every time I ask for help or advice from Republican officials, they come over, they open up the doors to hear me out,” Lugo said. “The problem is, Republicans are being portrayed as racist.”

During a convoy that followed the rally, which Lugo did not participate in, attendees rolled around in pickup trucks, flags billowing in the wind. Some of them shouted: “White power.”

Previous: Women Don’t Want Sex as They Age? Study Finds That’s a Myth
Next: President Trump and Pelosi Haven’t Spoken in a Year