Home » Safety & Security » No, Trump Rallies Are Not ‘Superspreader’ Events 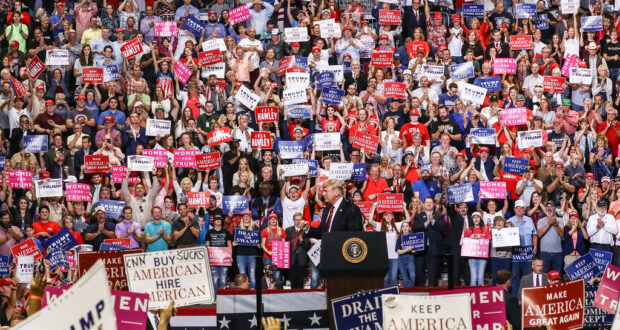 No, Trump Rallies Are Not ‘Superspreader’ Events

Thousands of enthusiastic supporters come to see Trump at his rallies. Each of these events ends up as another way to get hysterical about the coronavirus pandemic. Not only are many of the rally attendees maskless, but they don’t practice social distancing either. Does this mean hundreds, maybe thousands of rallygoers will test positive while infecting thousands of others?

In fact, according to a Daily Caller investigation, health authorities in many areas where Trump has recently held rallies say there is no direct evidence that the rallies resulted in an increase in positive tests.

Speculation from some observers before and during the events raised alarms that they could worsen the ongoing pandemic. But a combination of publicly available statistics on the spread of Coronavirus and analysis from public health experts concludes that the president’s campaign rallies cannot be tied to spikes in Covid-19 infections in their surrounding areas, if cases in the area even increased, which not all did.

In fact, the “maskless” rally criticism suggests that many people together creates a “superspreader” event. If this were true, how do you explain this? Thousands gathered indoors in Oklahoma’s second-largest city to welcome the president, and statewide new cases were 32% higher one week after the rally. However, cases in Tulsa County actually trended downward during the two weeks after the rally, and a spokesman with the Oklahoma State Department of Health told the Daily Caller that they don’t have “hard data” that connects the rally with any increase in cases.

In fact, health officials at almost all of the 23 Trump rally sites can’t connect any cases directly to rally attendance.

The Trump campaign held rallies in Old Forge, PA, Aug. 20 and Moon Township, PA, Sept. 22. Data from both Lackawanna and Allegheny County show increases in Covid-19 infections in the weeks following the rallies. However, Deputy Press Secretary Maggi Mumma of the Pennsylvania Department of Health said they had found no links between either rally and new Covid-19 cases.

There was one venue where health authorities report some new infections. Trump’s Sept. 18 rally in Bemidji, Minn., was the only event we investigated that ended up with multiple connected cases of Covid-19. Doug Schultz, Information Officer for the Minnesota Department of Health, says they have identified nine individuals who attended the rally and later tested positive for Coronavirus. The rally was attended by thousands of supporters. The DC’s analysis concludes “that there is no verifiable evidence to show that Trump rallies have meaningfully increased the spread of Covid-19.”

Certainly, health officials are “concerned.” That’s their job. But until someone has hard evidence that there is a real danger of contracting the coronavirus at these events, maybe they should stop reporting each and every Trump rally like a death watch.

Previous: Kim Kardashian Refuses to Badmouth President Trump After Their Work Together
Next: Do You Have ‘Smartphone Pinky’?