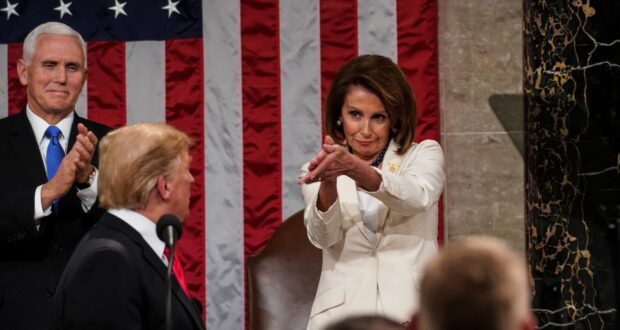 President Trump and Pelosi Haven’t Spoken in a Year

President Donald Trump and House Speaker Nancy Pelosi haven’t spoken in an entire year, but they’ve still seized countless opportunities over the past 12 months to express their contempt for each other.

The two last clashed face-to-face during a 20-minute meeting at the White House on October 16, 2019, according to CNN. The encounter, observed by more than a dozen officials in the room, escalated into an argument over who hates ISIS more and Pelosi accused Trump of calling her a “third-grade” politician.

The president later tweeted a photo of the engagement, which he described as “Nervous Nancy’s unhinged meltdown!” Pelosi, too, called Trump’s behavior a “meltdown.”

Friday’s anniversary of the bitter exchange comes as Trump and Pelosi have yet again sparked a blame game over a stalled coronavirus stimulus package that would send much-needed payments to financially struggling Americans.

And Pelosi scorned Trump earlier this week with the same offense, claiming his renewed interest in relief talks is because he “only wants his name on a check to go out before Election Day and for the market to go up,” Politico reported.

While Trump has voiced his desires on Twitter for a “big” bill, Treasury Secretary Steven Mnuchin has been the White House’s point-person speaking with Pelosi to finalize legislation. A comprehensive deal seems unlikely to surface within the coming weeks, however, as talks between the two parties have stalled. Senate Republicans are refusing to consider a trillion-dollar price tag and are preoccupied with confirming a new justice to the Supreme Court.

Another feud that has materialized between Pelosi and Trump this month involved the president’s mental state. Following his release from Walter Reed National Military Medical Center, where he underwent treatment for coronavirus, Pelosi raised doubts about the potential side effects of his medications.

“The president is, shall we say, in an altered state right now,” Pelosi told reporters in a weekly press conference, a day before the House introduced a bill to create a panel under the 25th Amendment, which is responsible for overseeing a transition of power to the vice president should the president become incapacitated.

“This legislation applies to future presidents,” Pelosi said, “but we are reminded of the necessity of action by the health of the current president.”

Trump later hit back at the House Speaker, along with a jab at his 2020 Democratic opponent Joe Biden.

“Crazy Nancy Pelosi is looking at the 25th Amendment in order to replace Joe Biden with Kamala Harris,” he tweeted. “The Dems want that to happen fast because Sleepy Joe is out of it!!!”

One year without direct communication between Trump and Pelosi further affirms their tumultuous relationship, and also serves as a reminder that bipartisan civility is sorely lacking in Washington, DC.

Trump and Pelosi’s last infamous showdown took place at the president’s State of the Union address in January, almost two months after the Democratic-led House impeached him. Tension filled the air from the start of the event to its end, with Trump neglecting to shake Pelosi’s hand and her ripping up a transcript of his speech.