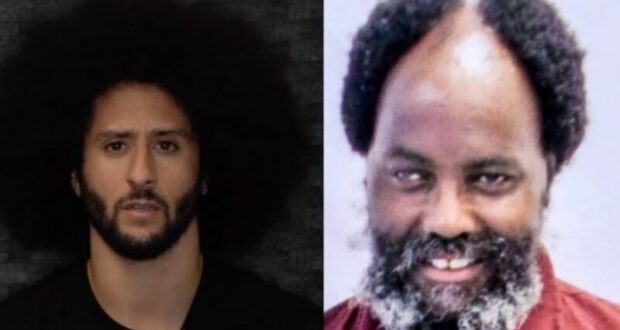 Former 49ers quarterback Colin Kaepernick has called for the release of cop-killer Mumia Abu-Jamal, who was convicted for the 1981 murder of police officer and U.S. Army veteran Daniel Faulkner.

During a virtual news conference on Monday, Kaepernick called upon the Philadelphia district attorney’s office to release Abu-Jamal, claiming that he was framed after falling prey to police brutality.

“Mumia has been in prison longer than I’ve been alive,” Kaepernick said in the press conference, later adding: “Since 1981, Mumia has maintained his innocence. His story has not changed.”

“Mumia was shot, brutalized, arrested, and chained to a hospital bed,” the former NFL star added.

Kaepernick emphasized that the Black Lives Matter movement demands that Abu-Jamal be released from prison so that his legacy matters.

“We’re in the midst of a movement that says Black Lives Matter, and if that’s truly the case, then it means that Mumia’s life and legacy must matter,” he said. “And the causes that he sacrificed his life and freedom for must matter as well.”

As reported by Newsbusters, Abu-Jamal was a former member of the Black Panthers who had as many as four witnesses testify that he murdered Officer Faulkner.

“Employed by a radio station, Abu-Jamal was a member of the Black Panthers. During a routine traffic stop in Philadelphia in 1981, Faulkner stopped a vehicle belonging to Abu-Jamal’s younger brother William Cook,” the outlet reported. “A physical confrontation ensued, and Abu-Jamal, who was nearby at the time, shot Faulkner in the back and in the face, the latter shot while the officer lay bleeding on the ground. Four witnesses testified to this.”

“Abu-Jamal was also shot in the confrontation and, while recovering in a hospital, admitted he shot the policeman and said he hoped Faulkner would die,” the report added.

Back in 2016, Kaepernick launched a protest movement when he said that America has been allowing cops to “murder” black people and demanded that police officers undergo further training.

“People of color have been targeted by police,” Kaepernick said. “So that’s a large part of it, and they’re government officials. They are put in place by the government. So that’s something that this country has to change. There’s things we can do to hold them more accountable. Make those standards higher. You have people that practice law and are lawyers and go to school for eight years, but you can become a cop in six months and don’t have to have the same amount of training as a cosmetologist.”

Following the violent protests and riots in response to George Floyd’s death at the hands of a Minneapolis police officer, Colin Kaepernick opposed civil protests, arguing that civility “leads to death.”

“When civility leads to death, revolting is the only logical reaction,” Kaepernick tweeted. “The cries for peace will rain down, and when they do, they will land on deaf ears, because your violence has brought this resistance. We have the right to fight back!”