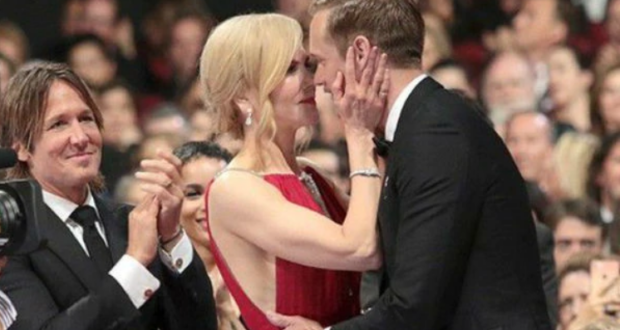 Keith Urban Angry with Nicole Kidman because of Alexander Skarsgard?

At the 2017 Emmy Awards, Nicole Kidman kissed her husband Keith Urban, then kissed her Big Little Lies co-star Alexander Skarsgard. This sparked years of tabloid stories surrounding this trio, including the popular narrative that Urban is jealous of Skarsgard. One tabloid now reports that Urban is livid with Kidman for working with Skarsgard again. Gossip Cop investigates.

According to New Idea, Kidman and Skarsgard “just can’t quit each other.” The two have just begun working on the new Robert Eggers film The Northman. This is sure to be another serious role for Kidman which has Urban upset: “Keith worries the toll it’s taking on her health” and is “begging Nicole to take a rest.” Kidman and Urban’s busy schedules mean the two have hardly gotten to spend any time together in “such a chaotic year.”

Kidman is showing no sign of slowing down either, as she’s going to produce and star in Things I Know To Be True for Amazon. “Keith was not happy when she signed on that dotted line,” a source told the tabloid. “It means the end of all his romantic ideas of reconnecting with his uber-busy wife and putting a little spark back in their marriage.” The article concludes by saying that Kidman’s “workaholic ways are becoming a major sticking point for Keith, but she refuses to see it.”

Kidman Is Doing Her Job

This story is rather preposterous. 2020 has indeed been chaotic for everyone, but various lockdowns and production delays would mean Kidman and Urban have actually spent more time together, not less. After fourteen years together, it’s safe to say they’ve developed a work/life balance. This story would have you believe that Urban is mad that his successful wife is continuing to do her job. Here’s a recent Instagram post from Kidman supporting her husband.

This is a classic bait and switch story from a tabloid notorious for using them. The photograph saying the Skarsgard and Kidman are “back together” is from 2016 and is therefore nothing new. Skarsgard barely comes up in this article, which is primarily focused on Kidman and Urban having issues over her acting.

This story about a Skarsgard and Kidman reunion is just the latest bait and switch, but hardly the first. It reported that Brad Pitt had sent Angelina Jolie to jail, only for the story to say he threatened to have her “dragged to jail.” She wasn’t actually in jail at all, just like when New Idea said Meghan Markle was in jail only for the story to be about her willingness to be jailed for protest. For New Idea, headlines and covers have nothing to do with the stories inside.

Other Bogus Stories From This Tabloid

Gossip Cop is dubious to this Urban and Kidman drama because this tabloid has a rough reputation. It recently reported that Kidman had saved Urban from relapsing. In that story, it was Kidman anxiously waiting at home instead of Urban, so it looks like New Idea is just rotating their places every couple of weeks.

This tabloid also reported that Kidman still harbored a grudge against Princess Diana over her crush on Tom Cruise. Kidman and Cruise have been divorced for a long time, and the Princess of Wales has been deceased longer than that. If any jealousy ever existed, it’s safe to say it’s gone now.

Urban and Kidman are both world-famous stars in their respective fields who are required to live on the road from time to time. There’s no evidence in this story other than an inaccurate title and unreliable sources.