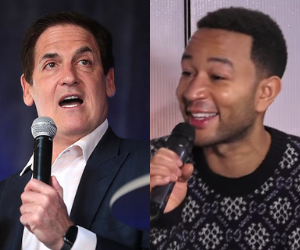 “Come on John,” Cuban tweeted. “There is a point of diminishing returns on political ad spend, there are no diminished returns when it comes to feeding the hungry.”

Mark Cuban, who owns the Dallas Mavericks basketball team and was a supporter of Hillary Clinton in 2016, tweeted that people who are considering donating to candidates in the Georgia Senate runoff elections should re-consider and donate to local food banks and other charities helping those in need. “Let’s put Americans in need above Politics,” he wrote.

John Legend disagreed, saying that “Senate flipping would be far more impactful than a food bank donation.” The pop star is a major Democrat activist who initially supported Elizabeth Warren’s presidential campaign before supporting Biden after Warren dropped out of the running.

Cuban criticized Legend for his comments, sarcastically saying that one political party “will solve all our problems!”

In the past, Cuban has entertained the idea of running for president but has yet to formally enter the political arena. In addition to owning the Dallas Mavericks, he has invested in numerous entertainment venturers, including 2929 Entertainment and the long-running ABC reality series Shark Tank, which he stars in.

The Georgia runoff elections, set for January 5, are among the most watched in the country. They could flip the Senate in favor of Democrats. Jon Ossoff and Raphael Warnock are looking to replace the seats of incumbent Republican Senators David Perdue and Kelly Loeffler.

Do you agree with Cuban or Legend? What is more beneficial – political donations or charity donations?

Previous: California Mom Dies After Hiking Accident Despite Being Rescued 2 Days Later
Next: Teen Who Sold His Kidney for iPhone Now Bedridden for Life