Home » Politics » Pompeo: There will be a ‘smooth transition to second Trump administration’ 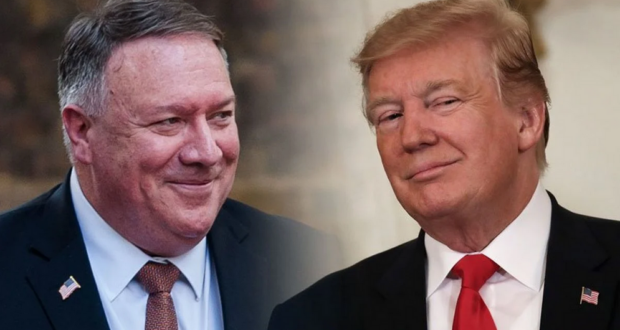 Pompeo: There will be a ‘smooth transition to second Trump administration’

Secretary of state Mike Pompeo has said there will be a “smooth transition to a second Trump administration” just days after Joe Biden was announced as president-elect.

Mr Pompeo made the comments when asked by reporters if the State Department was engaging with the Biden transition team.

The statement was followed by a stilted laugh, so it is unclear if he was speaking in serious reference to the Trump administration’s legal challenges to the election, or in an attempt at humor.

“We’re ready, the world is watching what’s taking place,” he said in follow-up.

“We’re counting votes, when the process is complete there’ll be electors selected, there’s a process the constitution lays it out pretty clearly. The world should have every confidence that the transition necessary to make sure that the State Department is functional today, successful today, and successful with the president who’s in office on January 20th.

Mr Trump has vowed to continue fighting the election after the results were projected by the Associated Press and other media orginisations, saying on Twitter “WE WILL WIN”.

Federal agencies, meanwhile, have reportedly been warned not to cooperate with the transition team of the projected president-elect.

Your daily US politics newsletter

While Mr Pompeo was holding a press conference to discuss foreign policy issues, he became frustrated as reporters continued to ask about the election results and whether the State Department would work with the next administration.

“We often encounter situations where it’s not clear about a particular election. We work to uncover facts, we work to do discovery, to learn whether in fact the outcome, the decision that was made reflected the will of the people.

“We want every one of those votes to be counted in the same way we have every expectation every vote here in the United States will be counted too. It is totally appropriate, the United States has an election system that is laid out deeply in our constitution, and we’re going to make sure that we get that right.”

Previous: More Than 50 Beheaded by Militant Islamists in Mozambique
Next: Was Marilyn Monroe a Communist? The Real Reason the FBI Monitored the Cultural Icon