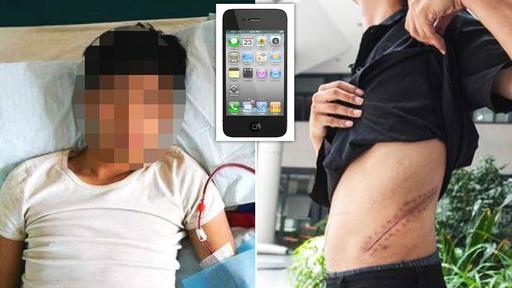 Teen Who Sold His Kidney for iPhone Now Bedridden for Life

A teenager who sold his kidney in order to buy an iPhone has likely been left bedridden for life after suffering renal deficiency.

Wang Shangkun was 17 years old when he decided to sell the vital organ on the black market in exchange for $3,200.

The teenager, whose family lived in one of China’s poorest provinces, wanted to buy an iPad 2, but didn’t have enough money to afford the device. While surfing the Internet one day, he received a message from an organ harvester in an online chatroom. He told Shangkun he could get 20,000 yuan ($3,000) for selling a kidney.

Recalling the situation to China Network Television, per Vice, Shangkun said he underwent illegal surgery in the central Hunan province to have his right kidney removed and delivered to an unknown recipient. The surgery was reportedly carried out by two doctors who were also employed at local hospitals.

At the time, the teen thought, “why do I need a second kidney? one is enough.” Following the sale, he used the money to buy an iPad 2 and an iPhone 4.

When he returned home with his new devices, Shangkun’s mother grew suspicious and forced him to confess what he’d done.

According to BBC News, his mother said:

“When my son came home he had a laptop computer and an Apple phone. I asked him where all the money for that came from. When he couldn’t keep it to himself any longer he finally told us. He said, ‘Mum, I sold my kidney.’ When he told me I felt like the sky was crashing down on our family.”

After details of the exchange emerged, nine people involved in the operation were arrested, five of whom have since been charged with intentional injury and organ trading.

Those charged included the surgeon, the broker, the person who leased the operating room, and those who were tasked with hunting for donors through online chat rooms, NPR reports.

Where is he now?

Shangkun, who is now in his mid-twenties, later developed an infection in his remaining kidney. The infection is thought to have been caused by the unsanitary location of the operation and the lack of post-operative care.

He suffered renal deficiency, and his condition was so severe that he was rendered bedridden. Shangkun now has to undergo dialysis every day to clear his blood of the toxins that his remaining kidney can no longer handle.

After those involved in the harvesting operation were arrested, Shangkun’s family was reportedly awarded about $300,000 in compensation.