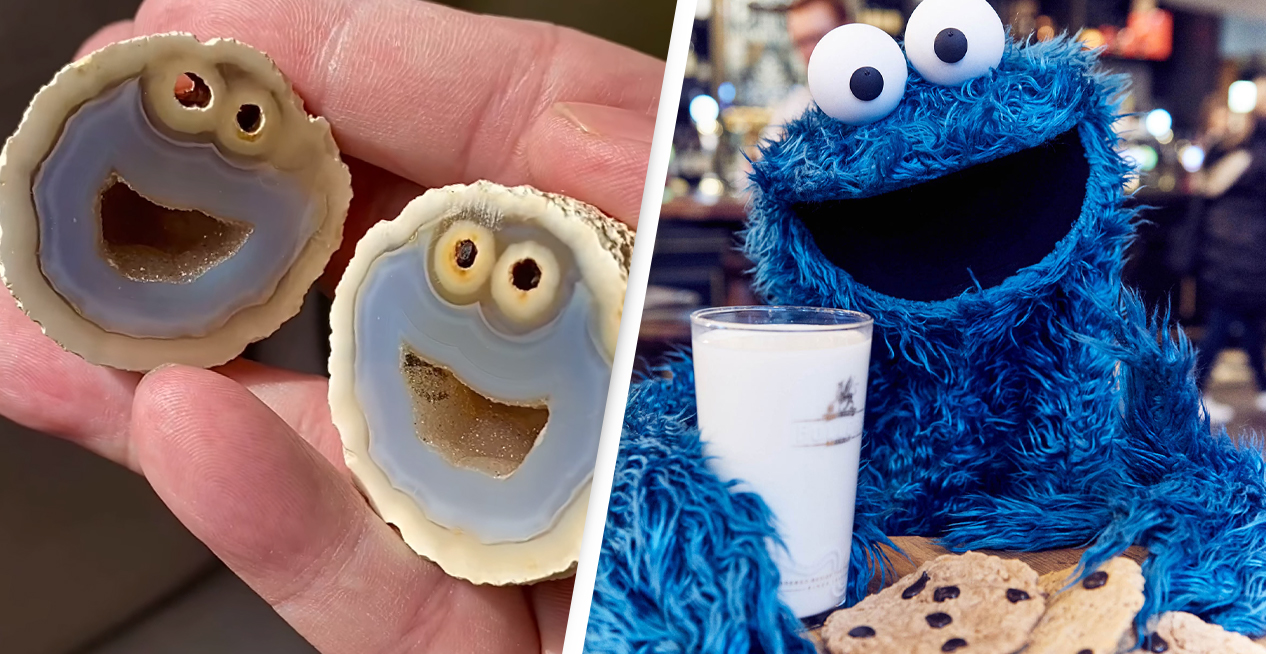 You have all heard stories about potato chips that look like Jesus. How about a rock that looks like a world-famous Muppet?

When a geologist was searching for geodes in Brazil, he certainly came across a rare find. Most geodes look very ordinary, but when split open, the reveal dazzling beautiful agates inside. When he struck this one open, he was surprised to find that it looked amazingly like the Cookie Monster from Sesame Street!

From the outside, the rock looks pretty ordinary–it’s plain brown and shaped like an egg. But on the inside, it is a magnificent cream and blue. And it looks just about ready to growl “COOKIE!” in an unmistakably gravelly voice!

A video of the rock was first posted on Facebook by a man named Mike Bowers, who referred to it as an agate, a common formation consisting of quartz and other gemstones.

The rock was also tweeted last week by Dr. Jacqueline Antonovich, historian of medicine, gender, and politics and assistant professor at Pennsylvania’s Muhlenberg College. The photo was retweeted 83,000 times.

I’m very mad at myself for forgetting to do an image description,” Antonovich wrote. “This image depicts a cross-section of a geode that resembles Cookie Monster.”

Since Bowers posted the image, he has had several offers to buy it. Apparently, there is a fair amount of people who feel a Sesame Street-themed piece of agate rock is just the thing they need in their lives. Bowers has received offers of over $10,000 for the rock so far.

Speaking to the Daily Mail about his surprise on finding such a perfect rendition of the much-beloved character, Bowers said, “This is very unusual! There are a few famous agates out there: the owl, the scared face, [but these are] approximate ones, but it’s rare to find [one] so clearly well-defined like that.”

I guess someone has final found out how “to get to Sesame Street.” It just takes some rock hunting in Brazil!

Have you ever found or saw something in nature that looked remarkably like something else?