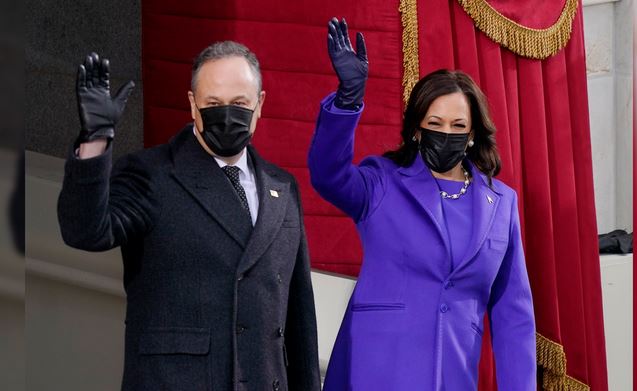 Is that a coincidence, or is there a significant meaning?

Twitter users quickly weighed in on the purple theme. The color purple is made by mixing red and blue, which are the colors that represent the Republican and Democratic parties, respectively. Many suggest wearing purple was a nod to bipartisanship and unity. Purple has also been one of the official colors of the suffragette National Women’s Party since 1913.

Cosmopolitan suggested another possibility. Kamala Harris may be paying tribute to Shirley Chisholm, the first Black woman elected to Congress in 1968, who also ran for president in 1972 on the Democratic ticket. Chisholm’s campaign materials contained the color purple.

Dr. Jill Biden wore a blue wool coat and dress by Alexandra O’Neill of Markarian, according to The Independent.

Jill Biden recently wore purple to a send-off event in Delaware and to a remembrance ceremony for Covid-19 victims that was held at the Lincoln Memorial Reflecting Pool.

At her concession speech in 2016, Hillary Clinton wore a dark gray suit with purple details.