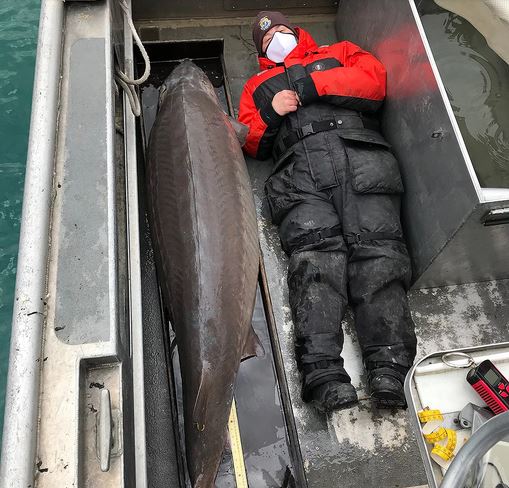 Biologists have discovered an extremely rare “river monster” in the Detroit River. They believe the creature has been lurking in the water since 1920.

A three-person crew from the Fish and Wildlife Conservation Office in Alpena, Michigan, caught the creature during their annual study of the river’s sturgeon fish population.

“It was the biggest fish our team has ever seen,” Jason Fischer, one of the biologists that caught the sturgeon, said in the statement. “This fish took all three of us to get it onto our boat.”

The massive 6-foot, 10-inch lake sturgeon weighed in at a whopping 240 lbs. Experts believe it is one of the largest sturgeon ever recorded in the United States. Biologists also estimate the fish to be a female that was hatched around 1920, over 100 years ago. After being measured, weighed, and marked with a unique tag, the fish was released back into the river so biologists can identify her if she’s ever caught again.

According to the U.S. Fish and Wildlife Service, the typical lifespan of lake sturgeon is 55 years for males and 80-150 years for females.

“She was tired out and didn’t fight us very much,” Wigren told the Associated Press. “Imagine everything that fish has lived through and seen.”

Wigren also said that during the catch she thought to herself, “Yep, this is going to be a real good fish story.”

Lake sturgeon are considered a threatened species in Michigan. The deterioration in the fish population has been fueled by over-harvesting, habitat loss, damming of tributaries, and pollution, according to the U.S. Fish and Wildlife Service.

Fischer also noted that more than 28,000 lake sturgeon use the St. Clair-Detroit River System. Of those fish, about 5,5000 come from the Detroit River. Though the population has significantly declined, it is still one of the largest in the Great Lakes.

“The U.S. Fish and Wildlife Service partners with a number of other agencies and universities, including the Michigan Department of Natural Resources, U.S. Geological Survey, Department of Fisheries and Oceans Canada, and Michigan Sea Grant,” Fischer added. “Together we monitor lake sturgeon populations in the St. Clair-Detroit River System and help populations recover through habitat restoration projects such as constructing rocky spawning reefs.”