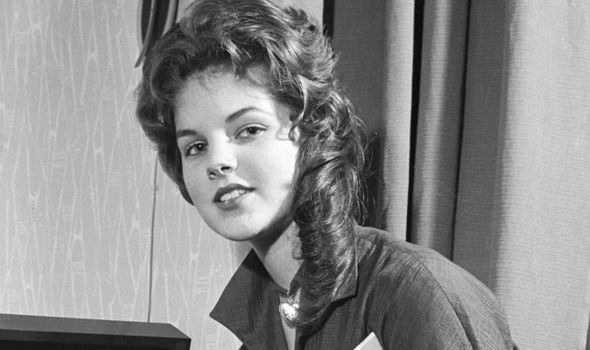 Yesterday was Priscilla Presley’s birthday (May 24). Most know her as Elvis Presley’s “child-bride”. But her whirlwind romance with Elvis was something that the singer initially thought would ruin him if anyone came to know of it.

In fact, the star reportedly begged his girlfriend Anita Wood not to out his relationship with Priscilla when she found out about it.

Elvis was still in a relationship with Anita in the 1960s when he first began dating Priscilla in Germany. When Anita had heard about a young “sweetheart” among his fan groups, she confronted Elvis.

But he denied he was seeing her, claiming that she was just a “child”. However, it took Anita about two years to gather evidence against Elvis and Priscilla.

The proof was a letter from Priscilla. It was revealed that Priscilla wanted to ensure that she was not forgotten by Elvis and hence wrote him letters. Anita spoke of the letters and said, “It was pressed in a book in the library outside of his bedroom…

In the letter, it said, ‘Please call my dad. I want to come over there and if you call my dad, I know he will let me come, he will listen to you. I miss you”

Anita added, “So when he came in, I said, ‘What is this letter, who is this, this Priscilla, you said she was just a child? He got so mad because I found the letter. He took me and he shoved me up against the closet.

He was so mad at me, just livid because I had found the letter.” Anita was extremely disappointed and as a result, she left Memphis and went to Elvis’ grandmother Minnie Mae’s home. Mae adored Anita.

Anita then recalled how Elvis had called her. “I didn’t want to talk to him. But he kept calling. I remember when he got me on the phone, (he said) ‘Little, please don’t tell anybody about this. This girl, again, she’s just a child. She’s just a fourteen-year-old child it means absolutely nothing. She just wants to visit, it means nothing’,” recalled Anita.

Priscilla was allowed by her father to visit Memphis for two weeks for the first time in the summer of 1962. After this, she convinced her father to allow her to move to Memphis permanently. Elvis and Priscilla got married in 1967 and had a daughter Lisa Marie Presley. The couple however divorced in 1973.

It was reported at the time that Elvis was forced into marrying Priscilla by her father who said that he would charge Elvis under the Mann Act as cited in the book ‘Down at the End of Lonely Street: Life and Death of Elvis Presley’ by Peter Harry Brown.