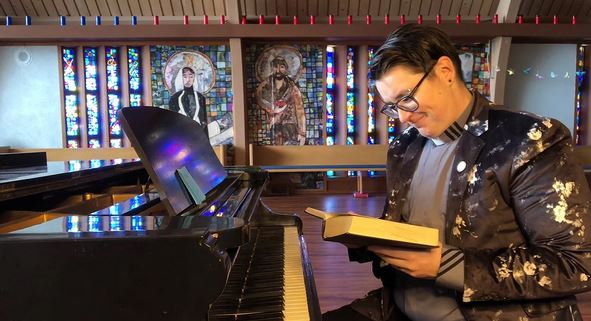 Rev. Dr. Megan Rohrer is making history in the Evangelical Lutheran Church as the first ever transgender bishop.

The Evangelical Lutheran Church in America (ELCA) announced in a press release that Rohrer, who uses they/them pronouns, was elected to serve a six-year term as bishop of the Sierra Pacific Synod.

“It’s humbling. It’s inspiring,” Rohrer told CNN. “And I think I’m very aware that this call is bigger than me — that it’s about serving God, and it’s about … a place in history that means a lot to a lot of people.”

Rohrer has served as pastor of Grace Lutheran Church in San Francisco since 2014 and was ordained during a time when the ELCA did not allow LGBTQ pastors to openly serve.

When the policy changed in 2009, Rohrer, who lives in San Francisco with their wife and two children, was among the first of seven pastors received into the ELCA.

“Most people’s feelings about gay and lesbian and trans people aren’t rational, and maybe as I’ve matured as a pastor, I’ve figured out that it’s feelings. People have a feeling or a fear that is compelling them to want to say no to an entire group of people,” Rohrer told Cosmopolitan in 2018. “The way to respond to that is by being our best self and by being louder than other people’s fear.”

Rohrer also told the outlet that they grew up in South Dakota, where the hardships they faced coming out as transgender inspired them to turn to religion.

“You can imagine it’s not the most fun place to figure out you’re trans,” they said. “The amount of religious abuse that people spoke near me and around me was enough to make me study religion.”

Rohrer, who has also worked with San Francisco’s LGBTQ homeless community as executive director of Welcome for the past 12 years, will be installed on Sept. 11 at St. Matthew Lutheran Church in Walnut Creek, California, according to the ELCA.

The ELCA, which has 3.3 million members, is the only Christian denomination (along with the Episcopal Church) to allow transgender people to serve as clergy, according to CNN.

“I think the most important thing I can say as a queer pastor is I’m sorry. Using faith to tear other people down is not good news,” Rohrer told Cosmopolitan. “We need to all be as loud and angry as the people who want to declare that there are types of people that god can’t love. People are literally dying because of it.”