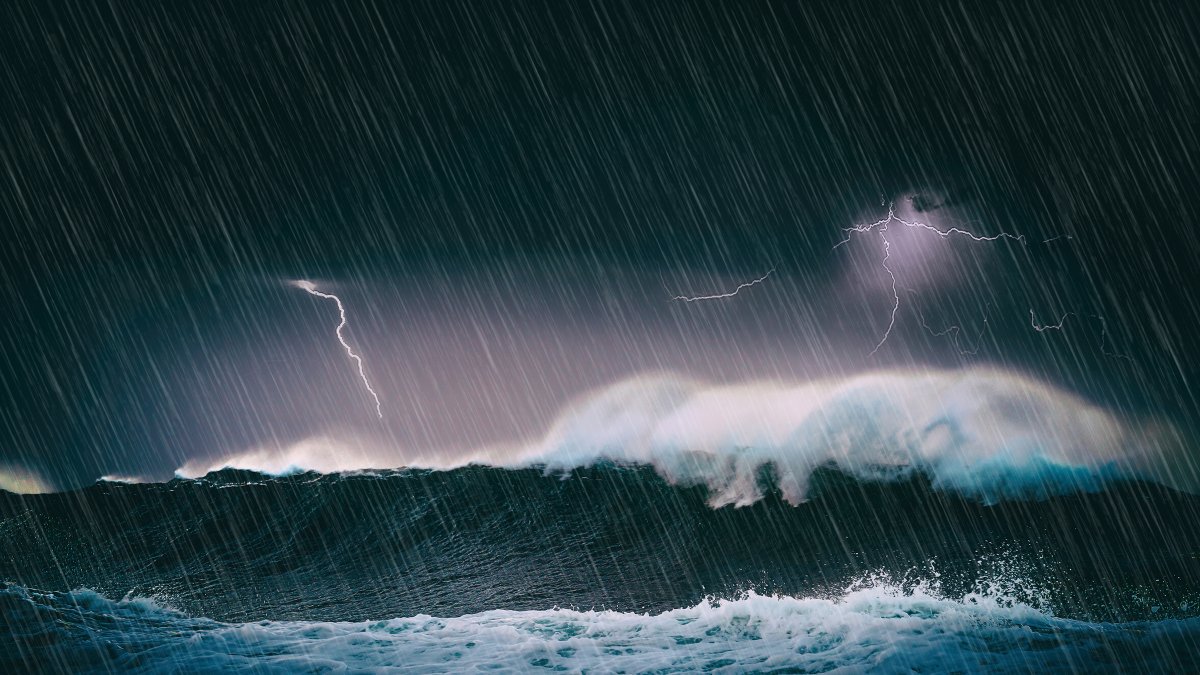 On November 25, 2019, Chris Carney and his two-man crew, Pete Brown and Jun “Sumi” Sumiyama, set off from Japan on their way to Hawaii in a 42-foot sailboat, the Coco-Haz III. They had four weeks to cross the world’s largest ocean. The boat’s owner, a retired Japanese dentist, needed the trip done in a hurry—he’d lose a boat slip he’d rented if it didn’t arrive in time. Carney didn’t think they would make it on schedule, even if everything went right. But things went far worse than he imagined when two catastrophes left them stranded in the middle of the sea.

Here is Carney’s story, as told to Outside.

It was morning when it happened. I got my raingear on and went up on the deck to make some changes to our course. I stuck my head up, and I couldn’t believe it—the mast was gone.

One of the shrouds that connected it to the ship just broke, I guess from metal fatigue. I’ve been sailing most of my life, and not only has this never happened on any boat I’ve been on, but I don’t know anybody else who’s had this happen to them, the mast just snapping like that.

It was December 19, and we were about a thousand miles from Oahu, Hawaii. We had lots of fuel, so we thought we could just motor in. The next day, a storm hit us. The seas were at 10 to 13 feet, nothing too dangerous. But as soon as night fell, there was one wave that went by, and we all looked at each other thinking, Whoa, that was a big one.

The next wave didn’t just roll us, it picked us up and threw us. We landed upside down in the sea.

It was incredibly violent. What they show on TV, when the camera goes up and down and things are falling? It doesn’t do it justice. Stuff was flying everywhere. The battery came blasting out of the engine compartment and shot through the cabin like a rocket. We got thrown around pretty good, and we were all bruised and cut. Sumi hit his head. We didn’t know how bad it was until later.

The three of us were standing on the ceiling, and the water was coming in fast. At first it was shin-deep, and then it came up to our knees. In no time it was at our thighs. The hatch was up in the front, underwater. I kept picturing what that would be like, opening that hatch and coming out on the surface during a storm. We would be in the middle of the ocean with nothing.

I was sure that this was where we were going to die, right here in this storm, in this water. I was thinking, God, this boat’s got to right itself. Sailboats are designed to flip back over if they roll, but you never know what’s going to happen at sea.

Finally, it did roll. But even though the boat was upright, we were waist-deep in water, with the storm sending in more every time a wave broke over us. The engine was flooded. Most of our fuel went into the ocean. We lost our navigation, all our electronics, nearly all of our fresh water—everything. We were dead in the water and adrift.

We did our best to bail. The waves were slamming into us, and the hull started to crack. If we had a breach, the boat was going to sink in about 30 seconds.

The storm didn’t break, and it was miserable. We were cold, and everything was wet. No dry clothes, no dry beds. We went on starvation rations, like five almonds per day. By rationing what little water and food we had left, we thought we could make it maybe 40 or 50 days. I had never seriously faced my mortality before. Everyone knows they’re going to die. But they don’t think that they are going die in 50 days.

The storm finally broke after 36 hours. We estimated that we had about 700 miles to go, so we rigged up a makeshift sail from the boat’s bimini top, kind of like a convertible top for a car. With that, we could make one or two knots, but if the current is one or two knots against you, you’re not going anywhere.

At that point, our biggest issue was morale. Each of us was entertaining our worst fears. Sumi kind of withdrew. He had a severe concussion, and he was sleeping 18 hours a day. He became very silent. Pete, who’s from Tennessee, kept coming up with these songs on the banjo. They were pretty morose. He was singing about how he’d never see his family again and how the sea was going to get him.

I gave us about a 10 percent chance. Pete was giving us much less. We had a compass but no maps and only a moderate indication of where we might be. Dead reckoning is a sketchy way to navigate; it’s just guessing the direction you’re going and how fast you’re traveling, but that’s what we did. The wind rarely shifts in that part of the ocean, so we used little ribbons tied around the boat to see where it was coming from. At night we relied on the feel of the wind on our cheeks. We thought we were at about 24 degrees north latitude when the rogue wave hit, so I figured that if we got down to 21 degrees, we might end up in the shipping lanes.

During the days, our time was occupied by tinkering with things. One guy would be driving, one guy who had been on watch the night before would be napping, and the other would be tinkering. Nothing we did could get that engine working. The satellite phone was wet, so we put it in rice at first and then dried it in the sun. To no avail. It never did get working.

Out of the 15 or so flashlights we had on board, only one was fully waterproof, so it was the only one that survived. At night you could use the moon and the stars to navigate. But occasionally you’d have to look at the compass. So that flashlight was key.

One night Pete fumbled for the flashlight and knocked it into the ocean. It was floating in the water, and we were heading away from it. Pete jumped in and swam. He was getting pretty far away from the boat. When he found it, he put it in his mouth, but the light was facing him, blinding him. He couldn’t see to swim back. I tried to wake up Sumi so I could go in and help, but he was in a trance, still concussed. I was screaming to Pete: “Swim to my voice!” I was thinking I’d have to turn the boat around and go back for him. But he swam hard and made it. His tooth was chipped from biting down on that flashlight.

Two days later, we finally had some luck. The wind magically started coming from behind us, and we made headway. Each day I would wake up and think, This a beautiful day to get rescued.

By day nine, we were feeling pretty good, and we were all inside trying to figure out how much drinking water was left. I started thinking we had spent too much time inside, and I popped my head up, and there was a freaking ship—right there, just a half-mile away. We sent up rockets and smoke bombs and stood on the deck screaming and waving. But it didn’t see us and just passed by.

Pete was supposed to have been up on deck at that moment. He felt pretty bad after that. He’s normally not a potty mouth, but he started swearing, saying, “This is a fucking shitshow.” It was the first ship we’d seen in three weeks, and it just went right by us.

But at least we knew that we were in a shipping lane. That gave us some hope.

Sumi started to feel better. His hand and head were both numb, and he was still concussed. But he was sleeping less and more upbeat. He was driving the next day when we saw a second ship.

It was a container ship called Nobility. It was a long way off. So we ripped the mirrors from the bathroom and used them to reflect the sun to signal the ship. For the longest time, it didn’t see us. We thought it might just pass us by, like the last one. Luckily, it eventually changed course, slowed way down, and blew its horn.

This was December 29. The Coast Guard had been searching since the 24th and was going to cancel the search on the 30th. The Nobility was headed to Korea. It took the Coast Guard about four hours to find the Kalamazoo, a Good Samaritan vessel that could bring us to Hawaii instead. It came up alongside us. They threw ropes down and tied us up.

I was reluctant to leave. I had never abandoned a boat in the middle of the ocean. You know how they say captains should go down with the ship? There’s an element of shame attached to not completing your voyage.

If I thought there was a 10 percent chance that we could find Hawaii, I probably would have said, “Let’s just take some water and we’ll be on our way.” Pete felt the same. He said, “Our mission is a failure.” But if we died out there, then our mission would have definitely been a failure.

We climbed on the Kalamazoo at sunset. The first thing they gave us was some steak and potatoes, which was their Sunday meal. As we ate, we laughed about our twist of fate. Just a day before, we were pretty sure we were not going to make it.

If someone finds themselves in the same spot I was in, I would say to use your noggin. Make your best guess. Say, “This is our plan, and let’s stick to it.” That’s what we did. After ten days, we were only eight miles off our guess of where we were.

While we were lost, I thought about how much I love my family. I’ve got a two-year-old son and a girlfriend in the Philippines. Thankfully, he will never have to say, “I never knew my father. He died when I was two, lost at sea.” Now I’ve got a chance to watch him grow up. I cherish the time that I have to spend with them. Maybe I took them for granted before? I don’t know.

My girlfriend has said she wasn’t worried. She said, “You promised me you’d come back.” Isn’t that what everybody says?