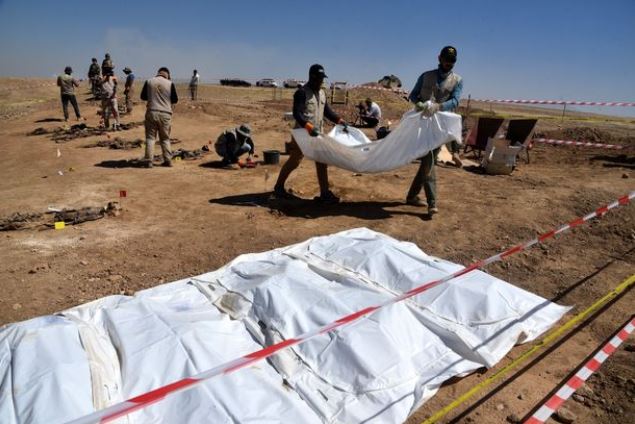 A mass grave with 123 dead bodies of people tortured and killed by ISIS has been discovered in Iraq, two years after the terror group was defeated.

In 2014, the Badush prison massacre saw inmates killed as ISIS took control during their occupation of Mosul.

ISIS freed Sunni Muslim prisoners but forced 583 mainly Shiite prisoners into trucks before driving them to a ravine and shooting them.

The grave, discovered after Iraqi forces took control of the area in March 2017, is one of more than 200 left behind by ISIS, according to the United Nations.

The bodies have now been removed from the grave in an attempt to have them identified.

Saleh Ahmed, a member of the government commission tasked with identifying the bodies, described the work to try to identify the victims.

“The heat is overwhelming. Some remains are entangled, and there are snakes and scorpions everywhere,” he said.

The United Nations believes more than 12,000 people are buried in graves at the hands of ISIS.

Najm al-Jubburi, governor of the Nineveh province where the prison is located, said, “Thousands of families are waiting to know what happened to their relatives.”

Abbas Mohammed, whose son was jailed at Badush following his arrest in 2005, is still waiting for news of his son.

“After 17 years of not knowing whether my son is alive or dead, I need an answer,” he said.

In 2017, Iraqi soldiers unearthed another mass grave near the prison containing the bodies of 500 people executed by ISIS.