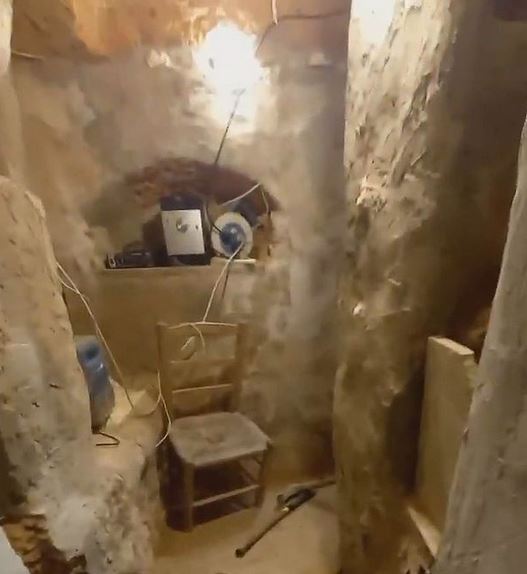 When Andres Canto was 14 years old, he got into a minor argument with his parents after they told him he wasn’t allowed to go into the local village wearing a tracksuit.

So, he stayed at home, grabbed his grandfather’s pickaxe, and used it to take out his frustration by hacking at the ground in the garden.

However, Andres’ quick release of anger soon became an obsession. Six years later, Andres is now 20 years old. And right where he first broke ground, he has created his own underground cave, complete with steps leading deep down to a structure with a bedroom.

Andres says he has no idea what initially sparked the idea of using his frustration to dig a hole at his family home in the town of La Romana, Spain. But he soon began using it as a way to wind down after school. He worked on his excavation by hand several days a week.

The project stepped up a few gears when his friend Andreu brought in a pneumatic drill. The two boys spent up to 14 hours a week digging almost 10-foot into the earth in his parents’ garden.

The layout of his private bedroom was often determined by the obstacles that got in the way of the project. “Sometimes I came across a big stone and it could be frustrating after hours of digging that I had done almost nothing,” Andres said.

The soil was originally removed by hand using buckets. But as Andres went deeper and deeper, he began to study excavation techniques and later developed a pulley system to take rubble to the surface.

When he started creating rooms, he reinforced the ceilings using arched entrances and vaulted ceilings with reinforced columns to prevent a potential collapse.

Andres has plans to expand even more. The cave currently has two rooms, a heating system, Wi-Fi, and a music system.

It is also a cool place to escape to in the hot summer. According to Andres, the underground mancave stays at a constant 20 or 21 degrees in the hottest months of the year. One downside, however, is that it occasionally floods during heavy rain and often attracts insects, spiders and snails.

Andres says his parents were fine with the build – but that authorities did visit to make sure it was legal. They found no issues as it couldn’t be defined as a basement, extension or storage structure.

“It’s great, I have everything I need. It can be tiring to work here as it is wet and there is not much air going around, but I have found my own motivation to keep on digging every day,” Andres said.

“I have always liked to build little huts. I live in the countryside and often when I found abandoned wood there, I would build a nice house. I was a kid with a lot of imagination,” he added.