Two Children Fighting for Their Lives After Bouncy Castle Explosion 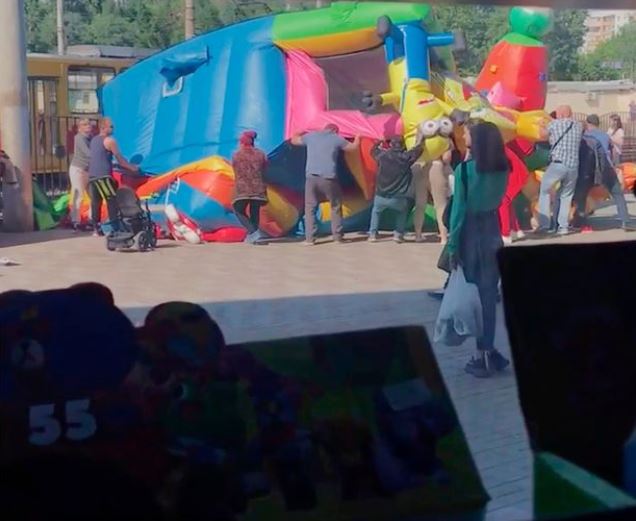 Two young girls are fighting for their lives after a bouncy castle suddenly “exploded” and flung them 25 ft into the air over a metal fence onto tram tracks.

Video shows panic in the Russian city of Barnaul as horrified parents try to grab the giant inflatable as it soars upwards with the girls, ages three and four, onboard.

Three other children were thrown off the out-of-control air castle, but were uninjured. The two girls – Anna and Vika- were thrown over a 6 ft metal fence onto tram tracks.

Anna is suffering a concussion and a spinal fracture. Vika, who landed around 15 ft from the bouncy castle, has a skull fracture and wounds to her lungs and abdomen.

One of the girls was placed on a ventilator as doctors try to save her. “The girls are currently undergoing treatment in the intensive care unit,” a health ministry spokesperson said.

Witnesses rushed to secure the castle and make sure no children were trapped inside.

Investigators are trying to figure out the cause of the incident. They initially said that it was caused by strong winds. However, witnesses denied there being any strong winds. Witnesses also claimed there was the “sound of an explosion” or a loud burst.

One theory was that the castle had been pumped up too strongly and that it was not properly secured.

One witness, Anastasia Dolmatova, said, “What wind? I work one bus stop away from this place, but even we heard the bang.” She called on investigators to “accurately check the cause.”

“Some of the ropes were not secured,” one local report said. “And in violation of all the requirements, the bouncy castle had been tied to the fence.”

The bouncy castle had no protective underlay, and was rubbing against the tarmac, possibly causing the burst, one witness said.

The Russian Investigative Committee has opened a criminal case into the incident. Reports say the owners of the attraction have been established.

Local MP Sergey Pisarev said, “No special mounts were used, the attraction was pumped, it heated up, and rose into the air.”

He complained there were no proper safety checks on bouncy castles. Local governor Viktor Tomenko ordered checks of all inflatables following the incident, according to reports.