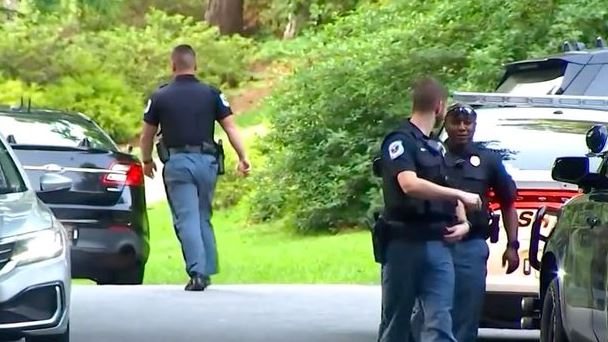 A golfing pro was shot and killed at a country club, and reports say the reason may be because he witnessed a crime.

41-year-old Gene Siller was shot dead in Georgia at around 2 pm on Saturday. The dad-of-two was the director of golf at Pinetree Country Club. His body was found near the course’s 10th green, police said. It was placed alongside a pickup truck which had two other bodies inside – which may have been the reason for his death.

Cobb County Police Department (CCPD) said Mr. Siller “witnessed an active crime taking place,” according to a New York Times report. The police also said that he “does not appear to have been targeted” but “happened upon a crime in progress.”

One of the other victims has been identified by police as 76-year-old Paul Pierson. Details of the second victim have not been released and the name of the alleged shooter is not yet known.

Officials have described the suspect as a 6ft 1ins Hispanic male with long hair, dark-colored work pants and a white or tan shirt.

CCPD said a motive has not been established yet.

Mr. Siller’s body was found with a gunshot wound to the head after he had approached a white Dodge Ram vehicle. Members of the country club told local media that gunfire broke out after the golfer went to investigate the truck on the fairway.

A witness is said to have heard five gunshots – “then nothing.”

Tributes have poured in for Mr. Siller since his death, including from the Professional Golfer’s Association (PGA). President Jim Richerson said members were “truly heartbroken to hear about the senseless murder.”

A GoFundMe page has been launched for Mr. Siller’s young family in the aftermath of the tragedy. It has already surpassed its goal of $500,000 – currently sitting at $554,825.

One donor said: “Just a terrific guy, personable, and a gentleman. He always carried himself with class, and was a gem of a guy.  It’s no surprise that he built a great career and family. We are saddened and hope his wife and two boys can carry on with the spirit and generosity that Gene always exuded. He will be missed.”

Rand Eberhard, a pastor who lives in a neighborhood near the country club and knew Mr. Siller, also paid tribute. “Gene was a man of compassion, he loved everybody,” he said.

Mr. Eberhard also said it would have been in Mr Siller’s nature to help someone in need. “He came in to check on a guy and help the guy, and this is what happens,” he added. “It’s an act of evil. It’s an act of selfishness.”

She told NBC News on Tuesday: “I loved him very dearly, and I am very sad.”

CCPD said there is not believed to be an active threat to the public following the shooting, which took place 27 miles from Atlanta.

The country club is expected to reopen in the coming days – but with the 10th hole closed.