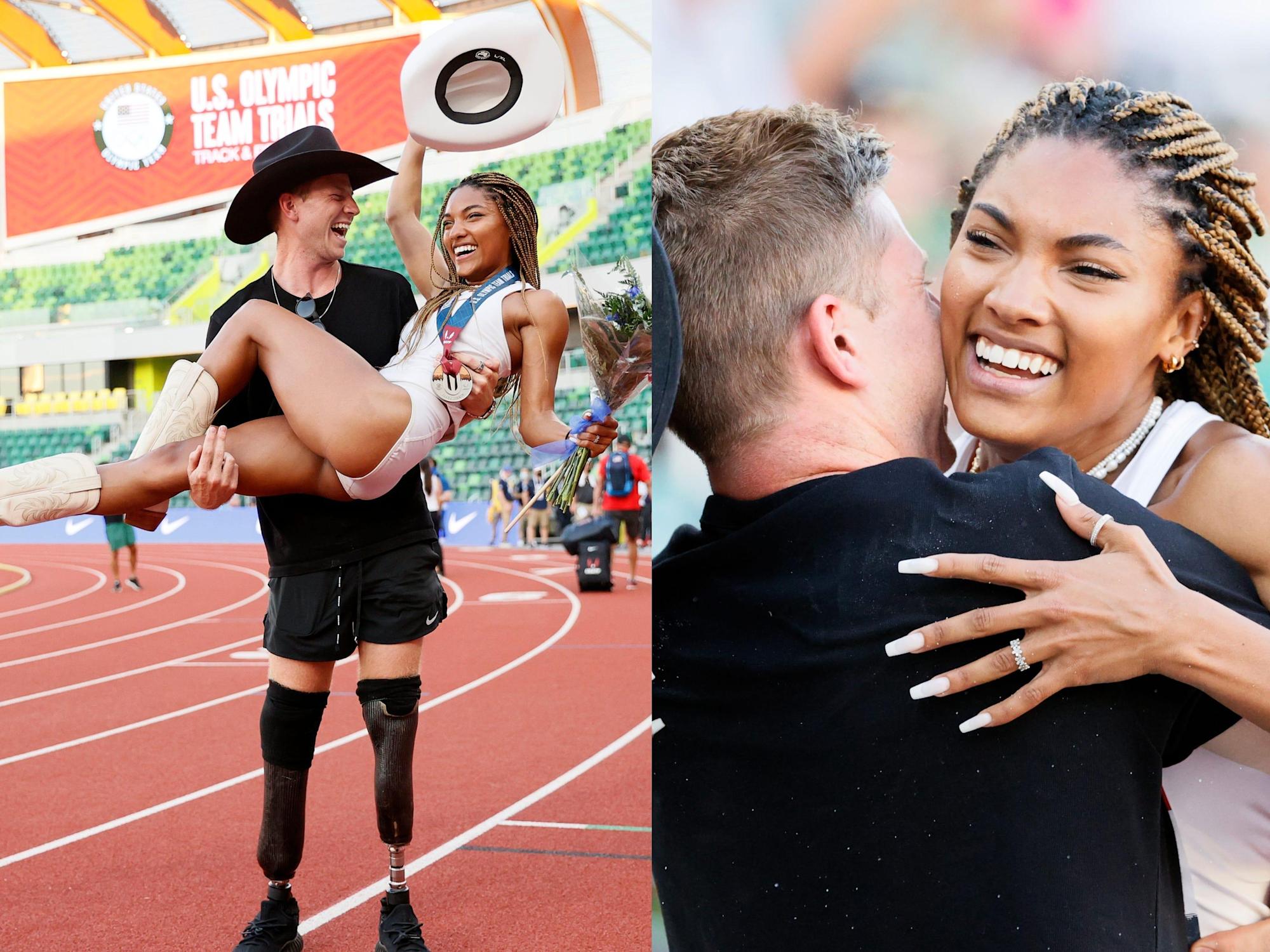 The first person Tara Davis celebrated with after qualifying for the Tokyo Olympics was her boyfriend of four years, the two-time Paralympic medalist Hunter Woodhall.

After jumping 23 feet to place second in the women’s long jump at the US Olympic trials in June, she dropped onto her knees — overwhelmed with emotions — before pulling herself up and jogging to the bleachers, where Woodhall waited with open arms.

“I ran up to Hunter and we had our moment. That moment solidified everything for me,” Davis, 22, told Insider. “To be able to hug him was an unreal experience. He said this yesterday, but it was the most memorable event that he’s seen in track and field.”

It was an exciting moment for the couple, who recently learned they would both compete in Tokyo. Woodhall, 22, qualified for the US Paralympic team after winning the 400-meter dash and placing second in the 100-meter dash one week earlier.

Woodhall, who won silver and bronze medals during the 2016 Paralympics in Rio de Janeiro, told Insider he had “no doubt” that Davis would make it.

“In Rio, I had my family and my friends there supporting me,” he said. “Now I get to be that person for Tara.”

Woodhall and Davis met at a track meet in high school

Woodhall and Davis met during their senior year of high school at a track meet in Idaho. At the time, Woodhall attended school in Utah, and Davis lived in California.

Davis said the track meet happened on Woodhall’s birthday, “so everyone kept saying ‘happy birthday,’ and the announcer kept giving him shout-outs.”

“After he finished his race, I went up to him and hugged him,” Davis added. “I don’t have a reason why I did that, but I did.”

The two followed each other on social media for a while, but Davis said it wasn’t until she responded to a late-night Twitter post from Woodhall that sparks flew.

In 2018, Davis transferred to the University of Texas to be closer to Woodhall. Still, as student-athletes, they had to “respect and acknowledge each other’s schedules” to make their relationship work between practices and competitions, they both said.

“I think that no relationship is easy when you’re so far apart,” Woodhall said, adding that frequent communication has been important for their relationship.

Davis said that as students, they often checked in with each other through FaceTime and linked at track meets when both Davis and Woodhall competed in the SEC. They said they plan to move in together after the Olympics and Paralympics end.

The couple told Insider that they were excited to watch their competitions and explore the city together. But Olympic organizers are barring spectators from the games after Tokyo declared a state of emergency due to COVID-19, so Woodhall and Davis will once again support each other from afar.

“It’s sad that we can’t watch each other at the Olympics, but I know we’ll be cheering each other on,” Davis said.

Woodhall added: “I feel like this speaks to who we are as a couple. We motivate each other and make a good team in a lot of ways. I think it’s really cool to do these amazing experiences and do it together.”