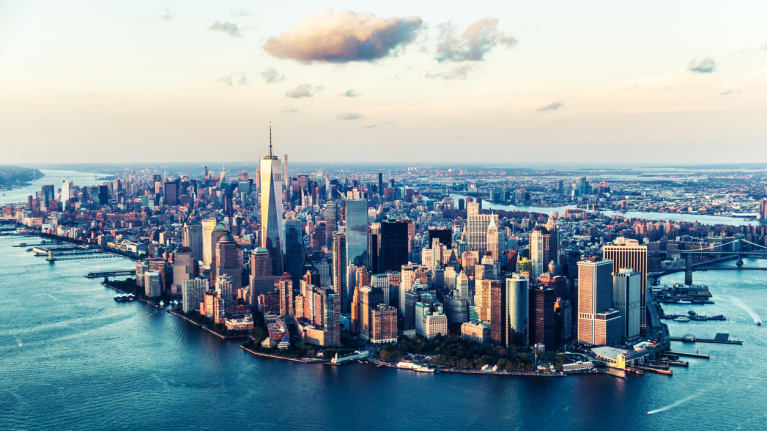 A shirtless man threw scalding liquid at a stranger in an unprovoked attack that was captured on video in Midtown Manhattan on July 5. Police have released the video in an effort to locate the attacker.

The attacker, who was wearing black shorts, ran away after dousing the unnamed man, who police said was 57 years old, with the unknown liquid that caused him to suffer second-degree burns, police said. The New York City Police Department (NYPD) is offering a reward of $3,500 for information leading to the perpetrator’s whereabouts and his identity.

Police said the victim “was walking along the sidewalk when he was approached by an unknown individual from behind.” When hit with the liquid, the video showed the man turning around to look at his attacker before stumbling and falling to the ground.

“There were no words exchanged prior to or during the assault” that occurred around 10 p.m. near the southwest corner of West 47th Street and 6th Avenue, police said.

The man took himself to Columbia Presbyterian Medical Center following the attack to receive treatment for the burns he sustained, according to police.

The victim did not believe to know who was behind the attack, NYPD Sergeant Anwar Ishmael told Newsweek.

He said the department’s detective squad is on the search for the attacker whose actions are considered a felony assault.

They are looking for the suspect, who police described as “an adult male with a light complexion, approximately 5’7″ tall, weighing 130 pounds, with brown hair and brown eyes.”

The day following the assault, the NYPD released citywide crime statistics for June 2021 that revealed the city’s overall crime index rose by 3.1 percent compared to June 2020.

“As summer proceeds, the NYPD remains focused on precision policing to reduce violence across all five boroughs,” the department said in the release.

There were 2,055 felony assaults last month compared to June 2020 when 2,039 assaults occurred, according to NYPD crime data.

“Keeping all New Yorkers safe is what drives us, and your police officers are working with community members around the clock to do just that,” said Police Commissioner Dermot Shea in a statement.

“Through targeted deployment and collaborative efforts with those we serve, the department continues in its mission to stamp out criminal activity and hold those who commit acts of violence to account,” Shea added.

“You should always be aware of your surroundings,” Ishmael said, regardless of the current crime rate, when asked for advice to residents traversing around the city streets.

The police are asking anyone with information on the unknown attacker in the video to call the NYPD’s Crime Stoppers Hotline at 1-800-577-TIPS (8477).