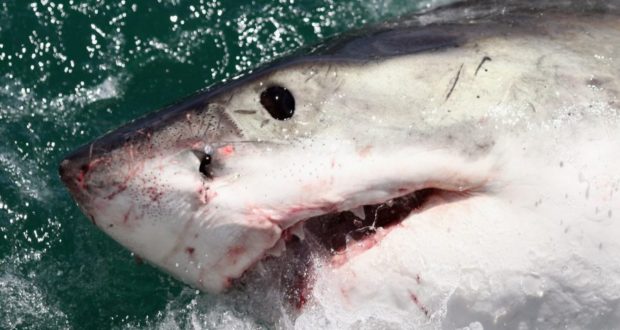 An experienced diver who survived a shark attack in the Bahamas last week spoke on TODAY Monday about the harrowing moment when he realized the shark had struck him from behind.

Jonathan Hernandez, a professional boat captain and fisherman from Florida, was spearfishing with friends off Abaco Island when he found himself in mortal danger from a shark bite. “I got hit so hard from behind I thought the boat had run me over,” he told NBC’s Kerry Sanders in an exclusive interview. “I immediately looked to the left side and the shark was right in my face.”

Hernandez was bitten on the left calf but was able to swim to safety.

“I was able to get away, kicking away,” he said. “I looked in the water, and I could see in the water that my calf was hanging and gushing blood into the water.”

“It all happened so fast it was kind of a blur of whitewater and fins and thrashing.”

Hernandez had his friends quickly make a tourniquet for his calf out of weight belts used for diving.

“The fact that the tourniquet went on between 60 and 90 seconds of the actual attack was probably the single biggest factor and why I’m sitting here talking to you today,” he said.

Hernandez told Sanders it will be six weeks before he can begin physical therapy on his “shredded” left calf. The attack on Hernandez came just days before California college student Jordan Lindsey, 21, was fatally attacked on June 26 by three sharks while snorkeling with her family in the Bahamas.

Hernandez blames the recent attacks in the Bahamas on popular local shark-feeding businesses that let tourists have close encounters with sharks.

“They’re associating humans with getting food, and it’s making it very dangerous to be in the water, whether you’re spearing or you just happen to be snorkeling near where they’re feeding them,” he said.

Shark attacks have also been occurring on the East Coast in recent weeks, including three in North Carolina as the summer gets in full swing.

Austin Reed, 19, survived an attack at North Carolina’s Ocean Isle Beach last month, an 8-year-old boy suffered puncture wounds to his leg in an attack on Bald Head Island, and 17-year-old Paige Winter lost a leg after surviving an attack at a state park beach when her dad punched a shark.

Previous: How to Stop Emotional Eating
Next: Could targeting this heart hormone help control blood pressure?