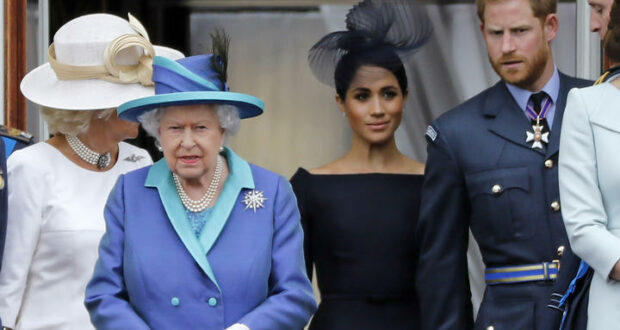 Prince Harry and Meghan to ‘Step Back’ From Royal Family

In a year of gut punches to Britain’s royal family, Prince Harry and his wife, Meghan, delivered a jarring blow of their own on Wednesday, announcing that they would “step back” from their official duties.

It was an extraordinary retreat by the popular prince and his American wife, who had grown increasingly isolated within the House of Windsor since their wedding in 2018.

In a statement, the Duke and Duchess of Sussex, as they are also known, said they planned to divide their time between Britain and North America and would “work to become financially independent.”

“After many months of reflection and internal discussions, we have chosen to make a transition this year to carve out a progressive new role within this institution,” the couple said in a post on their Instagram account. “It is with your encouragement, particularly over the last few years, that we feel prepared to make this adjustment.”

While the language in the statement was mild and upbeat, the change that Prince Harry and his wife are embarking on is momentous. Although he is only sixth in the line of succession to Queen Elizabeth II, Prince Harry has exerted an outsized hold on the public imagination ever since his days as the mischievous, ginger-haired younger son of Prince Charles and Princess Diana.

For the duke and duchess to forsake Britain and relinquish their royal duties, even for part of the year, will be a jolt to one of the nation’s most immutable institutions. It continues the convention-defying ways of Prince Harry, who enthralled millions of Britons, and angered some others, when he and Meghan, an American actress with a biracial background, decided to marry.

Buckingham Palace issued a terse two-line statement Wednesday evening, suggesting the couple’s announcement had caught the royal family off guard, if not totally blindsided it.

“Discussions with the Duke and Duchess of Sussex are at an early stage,” the statement said. “We understand their desire to take a different approach, but these are complicated issues that will take time to work through.”

Among those issues, one royal watcher said, was how a partial self-exile would work. Other members of the family have been exiled, either because of divorce, abdication or their own behavior. But no one has attempted the half-in, half-out arrangement that Prince Harry and his wife appear to be pursuing.

It raises vexing questions about how they would support themselves, since British taxpayers now fund their security, among many other expenses.

Prince Harry is the second prominent member of the royal family to step back from his official duties in just three months. Prince Andrew said last November that he would retire from public life after an interview with the BBC reignited questions about his relationship with the disgraced financier Jeffrey Epstein.

Prince Andrew’s calamitous interview, which revived accusations that he was involved in sex trafficking with Mr. Epstein, prompted some British newspapers to urge Prince Charles, the heir to the throne, to take a more forceful role in the family’s affairs, given that the queen is now 93.

Wednesday’s announcement came amid persistent rumors that Prince Harry and Meghan had tensions with his brother, Prince William, and his wife, Kate, which have been eagerly dissected by the tabloid press in London.

In October, during a trip to South Africa, the Sussexes opened up to the TV interviewer Tom Bradby. The duchess said she was struggling with being a royal and a new mother. Prince Harry kindled rumors of a rift by saying that he and Prince William were on “different paths at the moment.”

In her annual television Christmas address, the queen made an oblique allusion to all the troubles. “The path, of course, is not always smooth,” she said, “and may at times this year have felt quite bumpy.”

On Wednesday, the duke and duchess said they would continue “to fully support Her Majesty the Queen,” and would still support charities with which they are affiliated. But they said they wanted to give their 8-month-old son, Archie, “geographic balance” in his upbringing. Spending part of the year outside Britain, they said, would provide their family with “the space to focus on the next chapter, including the launch of our new charitable entity.”

The couple did not say where in North America they planned to live, but royal watchers said they expected it to be Canada, not the United States. They spent several weeks during the holidays at a house on Vancouver Island, and the Duchess of Sussex, previously known as Meghan Markle, lived in Toronto for several years, where her television series, “Suits,” was filmed.

The duchess’s mother, Doria Ragland, lives in Los Angeles, where the duchess was raised, and there have been occasional rumors that Prince Harry and his wife planned to live part of the year in Southern California.

“It’s an extraordinary announcement,” said Penny Junor, a royal biographer. “We will miss them, but I don’t think it will be all that damaging to the royal family.”

Prince Harry already carries out much of his official duties in the Commonwealth, of which Canada is a member. “The queen is queen of Canada, so there is some logic in that,” Ms. Junor said.

Still, there were many unanswered questions, not least how the couple planned to support themselves. “Their charitable work does not generate income, and they have a pretty extravagant lifestyle,” she said.

Royal watchers described Wednesday’s announcement as “unprecedented,” though not altogether surprising, given the obvious rising tensions within the family. Some saw the couple’s decision not to spend Christmas with the queen and other members of the family at her royal residence, Sandringham, as a kind of road test for separating themselves from the family.

Unlike Prince Andrew, Ms. Junor said, the Sussexes represent the future of the royal family. Their wedding, which mixed the pomp of St. George’s Chapel at Windsor Castle with songs by a gospel choir, was a global sensation, making them arguably the most popular members of the family after the queen herself.

But after a rapturous reception in the British press, the couple’s relationship with the tabloid press soon deteriorated. The papers criticized their zealous privacy, both during the duchess’s pregnancy and in their decision not to allow cameras to record the christening of Archie, a tradition among members of the family.

“If the British public is paying for the refurbishment of their home, the media was right to call them out for that,” Ms. Junor said.

Relations broke down completely after The Mail on Sunday published a letter the duchess sent to her father, Thomas Markle, in August 2018 asking him to stop talking to reporters and saying he had broken her heart “into a million pieces.” She sued the paper for copyright infringement and invasion of privacy.

Prince Harry filed separate legal proceedings against the owners of The Sun and The Daily Mirror related to allegations that they illegally intercepted his voice mail messages, perhaps as far back as in the early 2000s.

In an emotional statement released after the couple’s tour of southern Africa, Prince Harry railed against “relentless propaganda” and “continual misrepresentations” and accused the tabloids of subjecting his wife to the same cruel treatment they had inflicted on his mother, Diana, Princess of Wales.

She was hounded by the paparazzi for years, especially toward the end of her marriage to Prince Charles, and she died in 1997 in a car crash in Paris, as her driver tried to outrace pursuing photographers.

Prince Harry has had his own tribulations over the years, from confessions of drunken partying as a youth and wearing a Nazi uniform in public, to prouder moments after his military service as a helicopter pilot in Afghanistan. But Ms. Junor said he had become a “rock solid” member of the family, and one of its leading representatives abroad.

In recent months, the prince, whose public image was forever fixed for millions as the somber boy walking with his father and brother behind his mother’s casket, lashed out in a way that left some royal watchers puzzled.

“I’ve seen what happens when someone I love is commoditized to the point that they are no longer treated or seen as a real person,” Prince Harry wrote. “I lost my mother and now I watch my wife falling victim to the same powerful forces.”