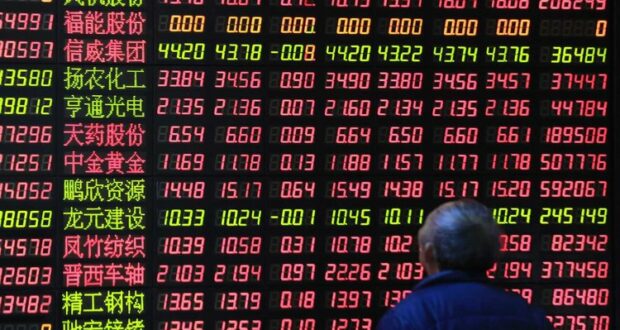 Stock investors have never been so downbeat on the world’s biggest banks.

China’s “big four” state-owned lenders, which together control more than $14 trillion of assets, tumbled to record-low valuations on Monday amid mounting concern that Beijing will encourage them to bail out smaller peers. Industrial & Commercial Bank of China Ltd., the world’s largest lender by assets, lost $11 billion of market value last week after injecting capital into a troubled regional bank as part of a government-orchestrated rescue.

Big Chinese lenders have long sacrificed profits in the name of national service, but that prospect has become increasingly worrying as pressure builds on their regional, city and rural peers. Smaller Chinese banks tracked by UBS Group AG need an estimated $349 billion of fresh capital — a sum they may struggle to raise without support from the likes of ICBC. For shareholders already skittish about the trade war, rising corporate defaults and slowing economic growth, it’s yet another reason to sell.

“State-owned commercial banks are clearly suffering from the market impression that they will need to swallow other smaller and weaker banks, at least partially,’’ said Alicia Garcia Herrero, chief economist for Asia Pacific at Natixis SA in Hong Kong.

ICBC declined to comment. The China Banking and Insurance Regulatory Commission and press officers at the country’s other mega-banks — China Construction Bank Corp., Bank of China Ltd., and Agricultural Bank of China Ltd. –- didn’t respond to requests for comment.

While the four firms have dominated China’s $40 trillion banking system for decades, they’ve been joined in recent years by a growing number of smaller banks, many of which funded themselves with opaque asset management products and interbank borrowing, instead of more stable consumer deposits. These smaller banks are now getting squeezed as regulators clamp down on risky funding methods and China’s economic slowdown causes bad loans to increase.

Their plight has been a major focus of investors since May, when Beijing surprised markets by seizing control of Baoshang Bank Co. in the first government takeover of a Chinese lender in two decades. That was followed two months later by a capital injection into Bank of Jinzhou Co. by ICBC and two other state-owned financial firms.

Analysts predict that more of China’s roughly 4,000 small lenders will run into trouble and that bigger banks will be asked to play a role in shoring them up. While regulators could in theory allow distressed lenders to fail, that outcome is seen as unlikely because of Beijing’s focus on maintaining financial stability. When authorities imposed losses on a small number of Baoshang Bank’s creditors, it triggered a mini-panic in interbank funding markets that only subsided after big cash injections from the central bank.

“The smaller banks, as they require the fire hose, will likely get rolled up into the bigger banks, where they can disappear,” said Christopher Balding, an associate professor at Fulbright University Vietnam who has written extensively on the Chinese economy and financial system.

Investors have responded by pummeling Hong Kong-listed shares of the big four, sending prices to record lows relative to book value, or net assets. The stocks traded on Monday at an average price-to-book ratio of 0.61, falling below a previous nadir reached in February 2016.

For investors with longer time horizons, it might be a good time to buy, said Terry Sun, a Hong Kong-based analyst at CMB International Securities Ltd. Chinese authorities are unlikely to force big banks to take on more than they can handle, according to Jim Stent, author of “China’s Banking Transformation.’’

“Even if you take some pretty severe assumptions on how many banks need to be taken over, you will likely find it’s scarcely a ripple on the profits and balance sheets of the big banks,’’ Stent said. The big four reported combined profits of $140 billion last year, according to data compiled by Bloomberg.

“The cases of Baoshang and Jinzhou will unlikely be an end,’’ Lei wrote. “Large banks could be brought in to deal with potential small bank problems going forward.’’

Previous: Google says it will use recycled materials in all of its hardware products by 2022
Next: Raised off the Grid: Meet the 17-Year Old Living in the Wilderness