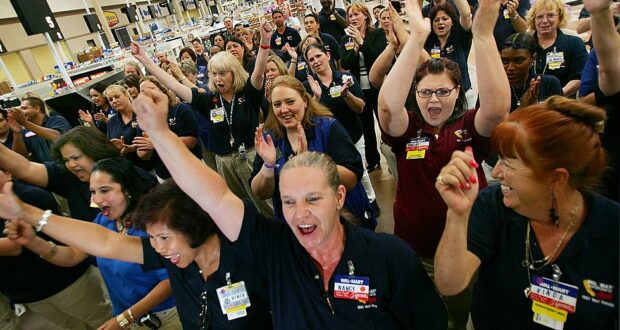 It could be shaping up to be a good week for Walmart Inc. investors. Even as the company grapples with mounting criticism of its gun-sales policies and concerns over looming tariffs, analysts are predicting a pretty good report.

JPMorgan’s Christopher Horvers expects the company to raise its fiscal 2020 earnings forecast, including Flipkart, to “slight” growth from its previous view of a low-single-digit decline. He isn’t expecting a change to the year comparable sales forecast, which currently stands at 2.5% to 3.0% growth.

Analysts are mixed on comparable sales, with some expecting them to beat estimates and others expecting them to be in-line, but one expectation is clear: U.S. results will outperform international ones, with John Zolidis of Quo Vadis Capital predicting the 19th straight quarter of positive store traffic.

E-commerce sales performance in the U.S. will be closely watched. Telsey Advisory estimates a 37% year-over-year gain, which would match the first-quarter growth. Bank of America is looking for a 35% advance, and Zolidis predicts a rise of at least 30%. In addition, analysts may have lingering questions around tariffs, even as the Trump administration said Tuesday it will delay until mid-December the 10% tariff on some Chinese products.

Here are additional comments that Wall Street analysts made ahead of Thursday’s earnings:

Previous: Epstein’s Death Suicide or Homicide?
Next: Off The Grid: Tips To Survive Anything