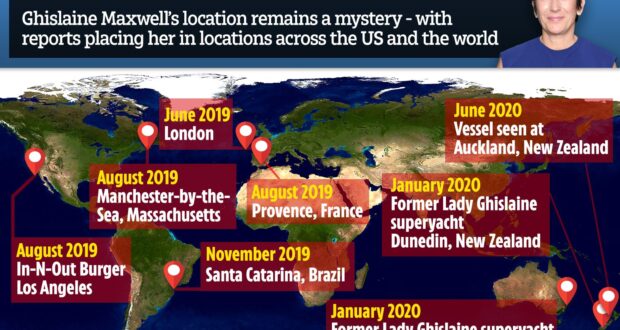 A SUPERYACHT previously named after the fugitive socialite Ghislaine Maxwell has been spotted in New Zealand after sailing from Australia.

But the mystery of her whereabouts remains after the crew reportedly refused to say how long it’s been in Auckland or who is on board.

Maxwell, one of the world’s most wanted women, is thought to have fled to France, where she was born, to avoid questioning in the US by the FBI over her links to the late disgraced billionaire.

But as revealed by the Sun, the 58-year-old, who vanished from public life in 2016, moved into her secret bolthole on Avenue Matignon, in Paris’s exclusive 8th Arrondissement, to remain undetected.

Now the mystery has been deepened after a 190ft vessel linked to her has been spotted in New Zealand.

It was previously owned by crooked British media mogul Robert Maxwell, who named it Lady Ghislaine after his beloved daughter.

The yacht is now named The Dancing Hare and registered to a company named Touille, based in Vallauris, France.

In January this year it sailed from Sydney to Dunedin, New Zealand.

The stuff.co.nz reported it being seen at Auckland although the marina and crew remained tight-lipped about the how long it has been there and who was on board.

The vessel was built for one Emad Khashoggi, the cousin of murdered journalist Jamal Khashoggi, in 1986, before being bought by Maxwell.

In 1991, his naked body was discovered floating in the Atlantic Ocean, having fallen overboard from his yacht near the Canary Islands.

It was unclear if he had fallen, was pushed or jumped off his yacht or whether he had drowned or suffered a heart attack.

Some conspiracy theories even suggest that Maxwell was murdered.

It later emerged that the Mirror Group owner had plundered its pension fund.

The boat was sold by administrators in 1992 to a US buyer.

It was then renamed Lady Mona K .

It is only a five-minute drive along the Champs ­Elysees to Epstein’s vast apartment on Avenue Foch, which was raided by French cops last September.

Maxwell, who is a long-term friend of the Duke of York, was spotted on Avenue Matignon in the days before France announced its Covid-19 lockdown in March.

The Sun has offered a £10,000 reward to anyone who can provide information which directly results in us successfully making contact with her in person.

The last public sighting was said to have been last August, when she was apparently photographed at Los Angeles fast food joint In-N-Out Burger, reading a book about CIA spies.

But the pictures — taken just days after Epstein committed suicide in jail — were later exposed as Photoshopped fakes.