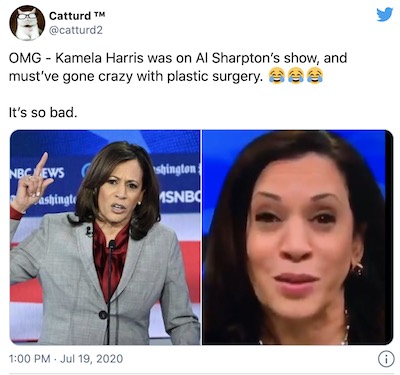 On Saturday evening during an interview with MSNBC host Al Sharpton, Senator Kamala Harris showed off her ‘new’ face which appeared to be stuck while reacting to the death of Congressman John Lewis.

It is unclear if the camera was warped or if the Senator recently went through a face surgery.

The Twitter world quickly made sure to react to the video.

“What did Kamala Harris do to her face?” said conservative Twitter user Kambree.

Ali Alexander tweeted: “Who did Kamala Harris’ cosmetic surgery during the pandemic lockdown?”

Check out the side-by-side shot of Harris just one week apart.

What are your thoughts? Let us know in the comments below!

84 thoughts on “Is She Okay? Kamala Harris’s Face Appears ‘Stuck’ During Live Interview”